Giovanni Battista Casoni "The Adoration of the Shepherds" 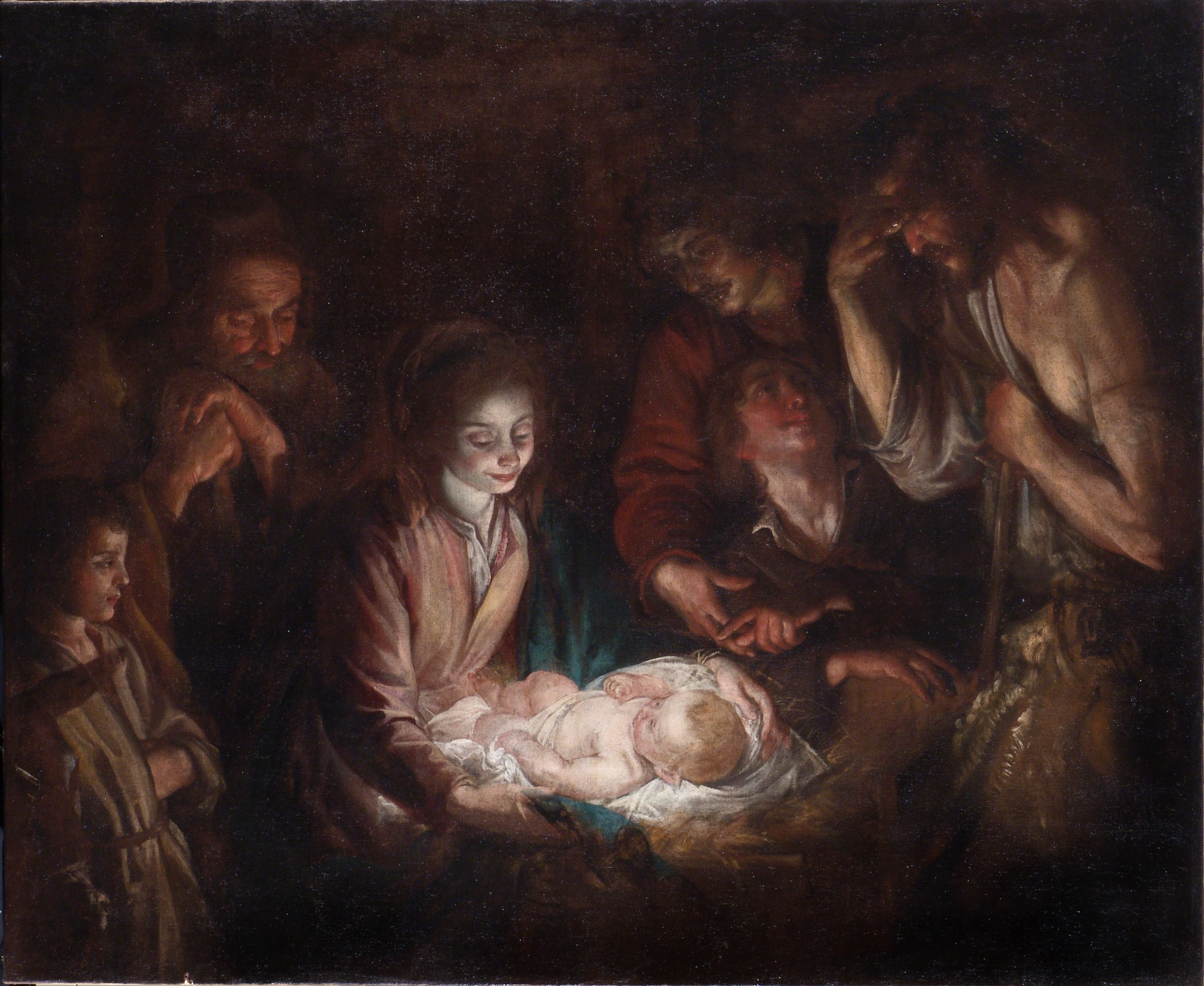 St. Luke is the only one of the evangelists to specify that the announcement of the birth of Jesus to the shepherds took place while they were “keeping watch over their flock by night” (Luke 2:8), while it is St John who defines Christ as the “light of the world” (John 8:12, 9:5) which, much like the “great light... that the eyes could not bear” described in the Gospel of James (19:2), unifies and characterises not just the painting under consideration, but also illustrious prior examples. These range from Correggio's celebrated Notte (Nativity or The Holy Night) and Cambiaso’s renowned experimentations, to the altarpiece in Fermo by Rubens and subsequent versions from the local school, including Domenico Piola and Gaulli.

Thanks to restoration carried out by the Laboratorio delle Scuole Pie in 2007, the painting today is in good condition and its execution can be discussed with a certain confidence.

Initially the artist was thought to be Domenico Fiasella, who during his time in Rome would certainly have had the opportunity to appreciate many “candlelit” works by transalpine artists present in Rome at the same time, such as Van Baburen, Van Honthorst, and Terbrugghen, including the altarpiece intended for Fermo which Rubens worked on in the spring of 1608. This particular contact appears to be proved by a small painting, made known by Piero Boccardo and Anna Orlando, whose true protagonist, besides the iconographic subject, is the nocturnal atmosphere itself, in which can be discerned a shepherd “in a  semi-genuflected position of Cambiaso-esque origin which revises the corresponding Rubens figure, from which it also takes, reversing them, the gaze and gesture of the boy beside him”. In the same way, similar figurative parallels in the painting under consideration, very close in layout to the small painting in a private collection, can also be traced: notably the pointing figure on the right, while on the left is St Joseph leaning on a stick, and in the centre, the light of Christ the Saviour come to the world, gazed upon by the Virgin who, in the work here displayed, is not lifting her veil in Raphaelesque style, but lovingly encircles the straw crib in which the baby Jesus lies.

Despite this convincing attribution, it would be remiss to overlook the possible role played by the most skilled and loyal of Fiasella's collaborators, Giovanni Battista Casoni, by virtue of a brushstroke which is visibly looser and more dynamic when compared with Fiasella's customary technique, of particularly effective and softly modelling skin highlights, of a hollow mark used for the shepherds’ expressions, and of a certain hesitancy in the volumes typical of the way Casoni depicts his figures. Even the physiognomic qualities of the Virgin Mary’s face seem to be far from the known, firm Fiasella type and are, if anything, closer to certain paintings now conclusively attributed to his pupil.

When the work was donated to the Capuchin monks in 2002, it was registered as a copy after Van Honthorst, without any reference to the local school, which seems, without doubt, to be the more correct basis for reference. A timeline of output between the 1650s and ‘60s  would also seem to bear out the possibility that what we have before us is a work by Casoni, reminiscent of the Fiasella style but carried out with a certain autonomy of painting style and execution.

Giovanni Battista Casoni "The Adoration of the Shepherds"