Santa Caterina in the past

Since 1488, the year of its foundation, the church and convent of Santa Caterina have always been closely linked to the nearby Ospedale di Pammatone, even in architectural terms: the old buildings were connected by a passage.

The church of Santissima Annunziata di Portoria was so called because of its proximity to the densely populated Portoria district. Although also known as “Annunziata Vecchia” and “Nunziatella”, to distinguish it from the later and larger church of Annunziata del Vastato, it has always been commonly known as the church of Santa Caterina, because it housed the incorrupt body of the great Genoese saint.

Once preceded by a quiet 18th-century square enclosed by railings, today the church is dominated and eclipsed by the bulk of the Palazzo di Giustizia, which looms over the short flight of steps leading from Via Bartolomeo Bosco and over the small entrance area. Facing onto this area are the entrance to the Capuchin monastery, decorated with a slate lunette depicting the “Stigmata of St Francis” and the date (8 June 1488) of its founding on the behest of Father Angelo da Chivasso, a contemporary of St Catherine; the entrance to the upper chapel or Deposito, where the incorrupt body of St Catherine was kept; and the beautiful Renaissance doorway to the church, which also has a second entrance on the Acquasola esplanade.

One of a kind in the entire city, the Renaissance double doorway in marble, decorated with acanthus leaf capitals and monk's head on the pilasters, is the work of Lombard Antonio Piuma, dating back to 1521, and it is topped by an oval bas-relief of the Annunciation, by Francesco Maria Schiaffino.

The interior of the church, established in 1488 by the Friars Minor led by Blessed Angelo Carletti di Chivasso (who also founded the Genoese Monte di Pietà), has three naves supported by brick pillars and has been described as “the great workshop of the 16th century” because of the line-up of artists who worked on its decoration.

The main altar, commissioned by nobleman Battista Grimald, who had it built in 1563 and where he wished to be buried, is one of the most beautiful of its kind. Built entirely in marble, in graceful Baroque style, it bears the fine 16 th-century wooden crucifix by Giambattista Gaggini of Bissone (il Veneziano). The painting in the apse representing the Annunciation, for which the church is named, and the two paintings on the side walls, dedicated to the Chiamata degli Eletti (Gathering of the Elects) and the Cacciata dei Reprobi (Banishment of the Wicked), are the work of Luca Cambiaso. In the apse's semi-dome, the medallion with Christ the Judge surrounded by angels bearing the symbols of the Passion, and the corbels with the four Evangelists, were frescoed by Giovanni Battista Castello (il Bergamasco).

The Mausoleum of St Catherine holds and displays for the faithful worship the miraculously incorrupt body of "domina Catalinetta" Fieschi Adorno, who died in 1510 after a life dedicated to helping the sick in the adjacent Ospedale di Pammatone, and was canonised in 1737. The eighteenth-century bronze and crystal shrine is supported by a Carrara marble complex made in 1738 by Francesco Maria Schiaffino, including the altar with four statues symbolising Divine Love, Strength, Obedience and Penitence. The tabernacle, the decorative figurines and the candelabra are by Ignazio Peschiera, and date back to the early 19th century, when the church was renovated.

Previously located in the upper chapel, or Deposito di Santa Caterina, since 1960 the mausoleum has been in the third chapel on the right facing the altar, founded by Francesco Pallavicino in 1490 and frescoed by Pantaleo Calvi with “God the Father” in the vault and the Prophets and Evangelists on the corbels. The two paintings on the walls, depicting the “Crossing of the Red Sea” and the “Adoration of the Magi”, are by unknown artists.

Returning to the entrance and continuing the tour, starting from the right we come immediately to the chapel of the Conversion of St Catherine, with a redeployed altar with four black Como marble columns and a 17th-century painting by Pietro Raimondi depicting “Christ Appearing to St Catherine” on the altarpiece. On the walls, “Transito di Santa Caterina” (Passing of St Catherine) by Carlo Giuseppe Ratti.

The chapel dedicated to the Assumption of the Virgin preserves works attributed to 16th-century painter Andrea Semino: the “Assumption” on the altarpiece, the “Coronation of the Virgin” on the vault, and the “Annunciation” and “The Shepherds at the Manger” in the lunettes. After the chapel with the Mausoleum of St Catherine, we come to the chapel dedicated the Nativity of Our Lord Jesus Christ, decorated by Andrea Semino with the panel of the “Adoration of the Shepherds” on the altar, and on the side walls “The Angels Appearing to the Shepherds”, and the “Sleeping St Joseph”.

In the chapel of Our Lady of Sorrows, formerly dedicated to Our Lady of Mercy like the Ospedale di Pammatone, a papier-mache statue of the Addolorata (Collina Graziana da Faenza, 1893) is in the alcove above the altar. On the walls: Cristo nell’orto (The Agony in the Garden) by Luca Cambiaso and the Deposizione (Descent from the Cross) by Lazzaro Calvi; in the rib vaults, frescoes by Pantaleo Calvi depicting the prophets David, Isaiah and Jeremy, and the Erythraean and Cumaean sybils.

Crossing the church and arriving at the left nave, besides the main altar, we find the chapel of Sant’Antonio, with an altar dating back to 1723, originally dedicated to St Camillus de Lellis. On the walls we can see the “Visitation with St Augustine and St Nicholas of Tolentino” by Aurelio Lomi and St Camillus de Lellis by Domenico Parodi, as well as two side paintings by Giuseppe Palmieri representing “St Anthony holding the Child Jesus in his arms” and “St Anthony Preaching to the Fishes”. The semi-dome was frescoed by Pantaleo Calvi with Prophets and Sybils.

The chapel, near the stairs leading to the upper exit of the church, was once dedicated to the Pietà and is now occupied by the Baptistery. Above the baptismal font there is a painting representing the “Descent of the Holy Spirit” by an unknown artist; on the side walls: “Gesù confortato dall’angelo” (Jesus comforted by an angel in the garden of Gethsemane), by Giovanni Carlone, and St Frances of Rome by an unknown artist. The rib vaults were frescoed in the 19th century by Oldoino da Multedo with the Franciscan Saints.

The chapel of the Sacred Heart houses a painting of the same subject signed by Mattia Traverso and dated 1942. On the walls and vault, we can see frescoes dedicated to the Virgin, by Ottavio Ghissoni, dating back to the 16th century.

The chapel of the Magi holds three remarkable 16th-century paintings by Luca Cambiaso: the “Adoration of the Kings” over the altar and the two biblical figures with scrolls on the side walls. The statue depicting The Mercy is a work by Giacomo Antonio Ponzonelli.

The chapel of San Francesco d’Assisi, near the main door, was built by the Cambiaso family in 1723. On the altar, with its elegant black marble spiral columns from the destroyed church of Nostra Signora della Pace, there is the “Holy Family with St Francis” by Domenico Piola, coming from the now lost church of San Domenico. On the walls, “Predica di Sant’Antonio al tiranno Ezzelino” (St Anthony preaching to the tyrant Ezzelino da Romano)  by Giuseppe Palmieri.

In the gallery, the fine organ by the Novi Ligure firm Bianchi dates back to 1892; on the vault, Giovanni Battista Buffa has depicted a “Vision of St Francis” and four small portraits of Capuchin fathers, patrons of the restoration of the church.

The upper chapel (or “Deposito di Santa Caterina”), which overlooks the lower part of the church, can be reached via the large eighteenth-century staircase with entrance onto the small area outside. Designed in 1737 by Gaetano Cantoni to hold the shrine containing the incorrupt body of the saint, the large chapel was decorated in chiaroscuro along the walls and on the vault by Michele Canzio and Girolamo Curti (il Dentone), while the Virtues and the friezes depicting hospital rector St Catherine, Catherine with the Disciples of the Divino Amore (on the right), the plague of 1400 and the perfumer monks, and Catherine aiding the sick (on the left) are the work of Francesco Baratta. In the presbyteries, the tondo on the vault of St Catherine in glory, the paintings on the wall of the Visione e Miracolo di Santa Caterina (Vision and Miracle of Saint Catherine) and the corbels with symbolic figures were frescoed in 1822 by Santo Tagliafichi. On the far wall, the painting of Jesus appearing to St Catherine is from the studio of Piola.

The convent lodge and the remains of the 15th-century cloister (built in the typical architecture of the Minor Friars) house a fresco cycle attributed to Lorenzo Fassolo (1489), depicting biblical stories and scenes of Franciscan life, ornamental designs with the Christogram and medallions showing the customs of the time. In the sacristy is preserved the large crucifix, once located inside the church, which dates back to the time of St Catherine: the second half of the 15th century. 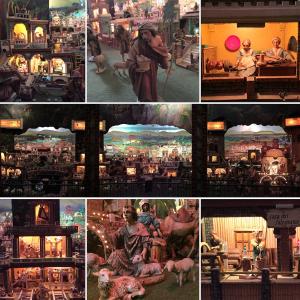 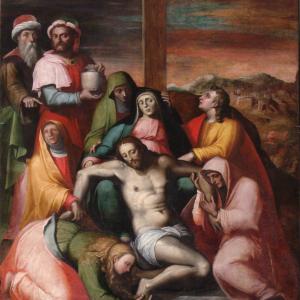 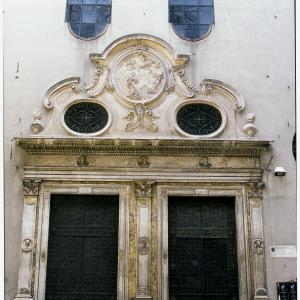