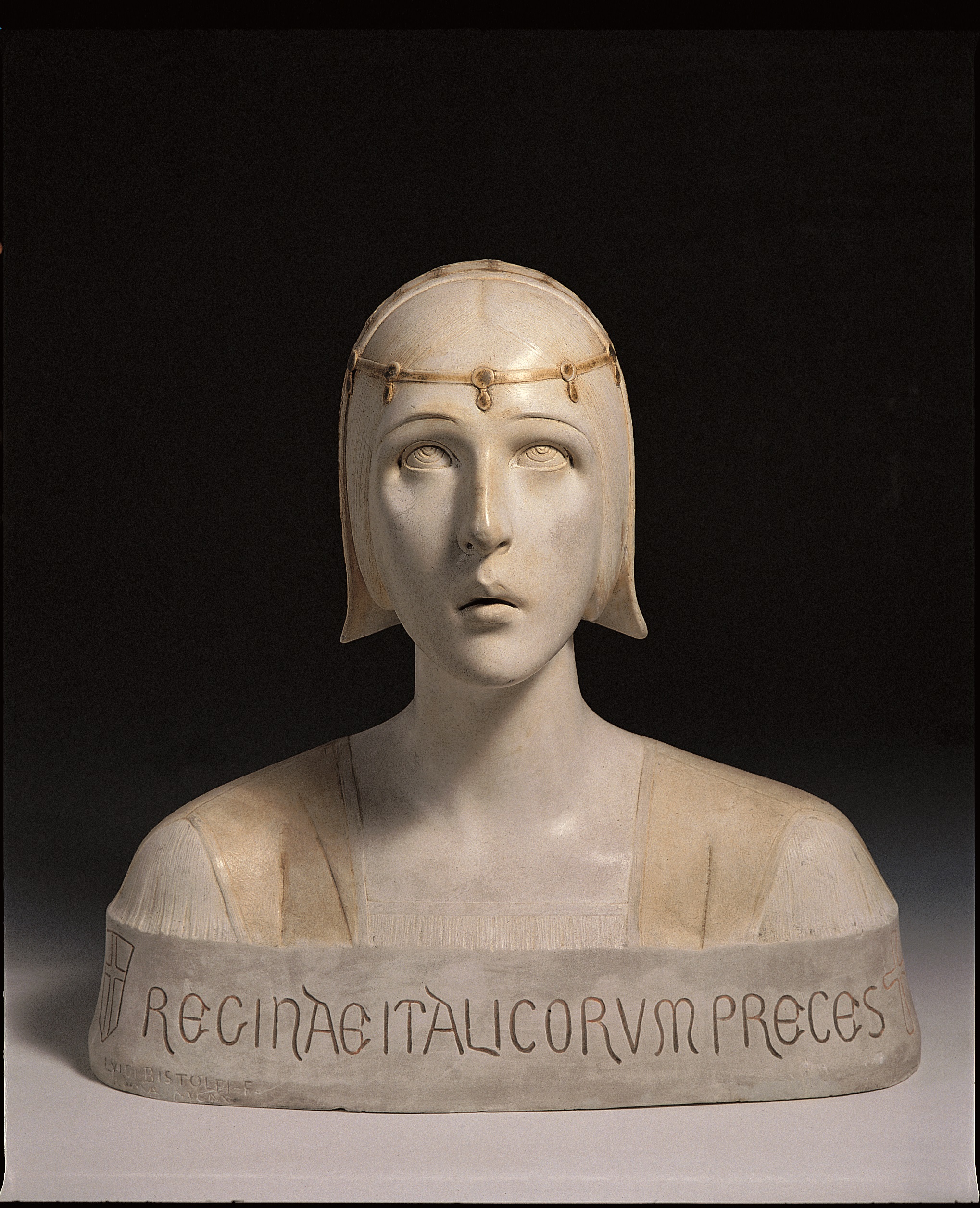 A perfectly-oval face and inspired gaze, along with the hairstyle and clothing of a Renaissance woman: this is how Luigi Bistolfi portrayed Margherita of Savoy at the dawn of the new century, polished and translucent, algid and enigmatic. Margherita had crossed the threshold of fifty years old. On 11th August 1900 she had taken on the role of queen mother, but for everyone she was still the first queen of Italy, ever since her husband Umberto became king in January 1878, succeeding his father Vittorio Emanuele II.

Conservative in her ideas and a sympathiser of Mussolini in the last years of her life which ended in Bordighera on 4th January 1926, Margherita was one of the most popular members of the Savoy family since 1868 when she married the heir to the throne at only seventeen years old. Instinctively communicative and deeply convinced of the importance of her role, she contributed to the prestige of the Savoy dynasty and, in particular, she made it one of the distinctive and unifying symbols of the newly-formed nation. An amateur painter, music lover, and friend of artists, writers, and poets, including the republican Carducci, she was the hostess of a famous cultural “club” in the capital and a devoted regular at exhibitions. Margherita was always behind the purchases that her husband and son made at the most important exhibition events of the time. The Biennial of Venice, whose first edition was held in 1895, had even been set up two years previously by the city of Venice to celebrate the twenty-fifth wedding anniversary of the royal couple.

Idealised and timeless, stylised and anti-naturalistic, Bistolfi’s portrait reveals the significant adhesion of the Piedmont-born sculptor to certain aspects of the symbolist expressive language and his almost enormous distance from that Verismo scrupulousness that characterised one of his famous works, the bust of Garibaldi located in front of the home of the “hero of two worlds” at Caprera.

Margherita then gave her support to the strategies of the first post-union governments aimed at creating a cultural identity for the new nation which, following the glorious battles of the Risorgimento, was a poor, backward country, basically agricultural and lacking in infrastructure. It was ripped apart by deep imbalances between the north and south, with a population oppressed by strong social inequalities and barely literate, that had a bad level of Italian and used it little. There was a need for symbols to grow a shared sense of belonging. It was inevitable to pin all hopes on the “fathers of the homeland”, privileging their degree of functionality to the interests of the royal family and the ruling classes, with the seemingly faded Cavour and the republican Mazzini neglected, and Vittorio Emanuele and Garibaldi greatly favoured.