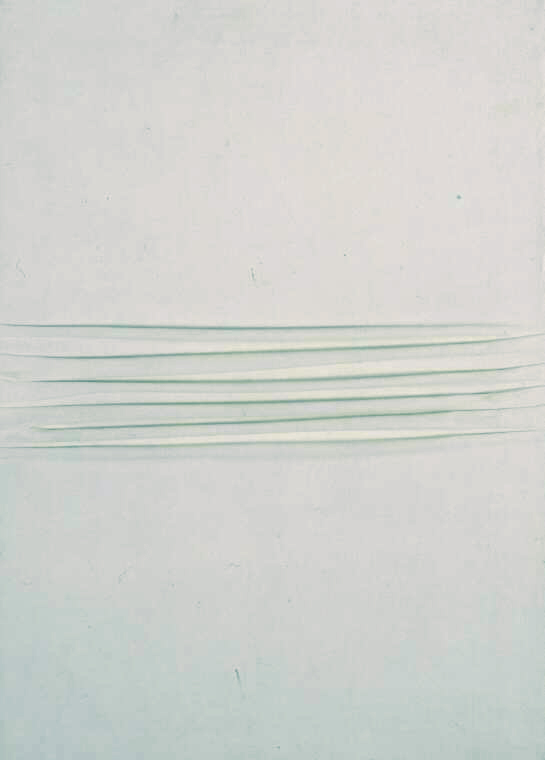 Even in the brief span of a few years, from 1957 to February 1963, the figure of Piero Manzoni would permanently revolutionise how art is made and conceived.

From his debut in the informal sphere of the Nuclear movement to his encounter with Lucio Fontana in Albisola and the lesson taken from Yves Klein’s Monochromes, the artist moved towards more experimental research, specifying his theories on art as “scientifically-based procedure” in 4 manifestos.

The first Achrome is from 1957: a casting of gesso and Kaolin on the canvas with a still informal wall-like effect, but one in which the artist's intervention is kept to a minimum. This series of works was designed as “one single uninterrupted surface” where the material becomes the focus on canvas in squares or wrinkled up: “...a white surface that is simply a white surface and nothing else (a colourless surface that is just a colourless surface). Better than that: a surface that simply is: to be (and to be complete is pure becoming)”. His experiments with Achromes continued over the years: they would incorporate objects, straw, wood, stone, bread rolls, establishing themselves as living entities, independent of the will of the artist himself, becoming increasingly synthetic, in fibreglass, plastic and polystyrene balls, and self-generating, with polystyrene soaked in cobalt chloride whose colours change with the changing of the weather conditions.

The work of art also surrenders its object status and shows itself only as concept in his subsequent works, Linee (Lines), Corpi d’aria (Bodies of air), Fiato d’artista (Artist’s breath), Impronte (Fingerprints).

The sensation caused by the Linee, culminating in an episode in which a visitor spat in outrage on the displayed work, did not stop the artist from continuing on his path towards the elimination of every psycho-existential reference, in order to reflect on the artist/production means relationship; partly thanks to the Azimut gallery and its associated magazine, opened in 1959 in Milan, with Enrico Castellani.

It was at this gallery in 1960 that the event Consumazione dell’arte dinamica del pubblico divorare l’arte (Consumption of Art by the Art-Devouring Public) was presented, considered to be the first ‘happening’ in Italy, at which hard-boiled eggs imprinted with the artist's thumbprint were distributed to the public to be eaten.

The controversy surrounding the commercialisation of art and the cult of authorship would influence further projects in those years; the Sculture viventi (Living sculptures) of 1961, in which anyone could receive the status of “work of art” thanks to the artist’s signature; the 3 magic bases, the last of which was created in Denmark, the Socle du monde n. 3 - Hommage a Galileo (Base of the world no. 3 - Homage to Galileo), an upturned pedestal supporting the Earth; and the 90 cans of Merda d’artista (Artist’s shit), one of the artist’s most notorious and provocative works.

The artist's body, the observer, the whole world becomes a work of art, bringing about the radical change for which Manzoni was the exponent: “One cannot leave the ground just by running and jumping; one needs wings; changes are not sufficient; the transformations must be total”.