Bernardo Strozzi "The Virgin and Child with San Felice of Cantalice" 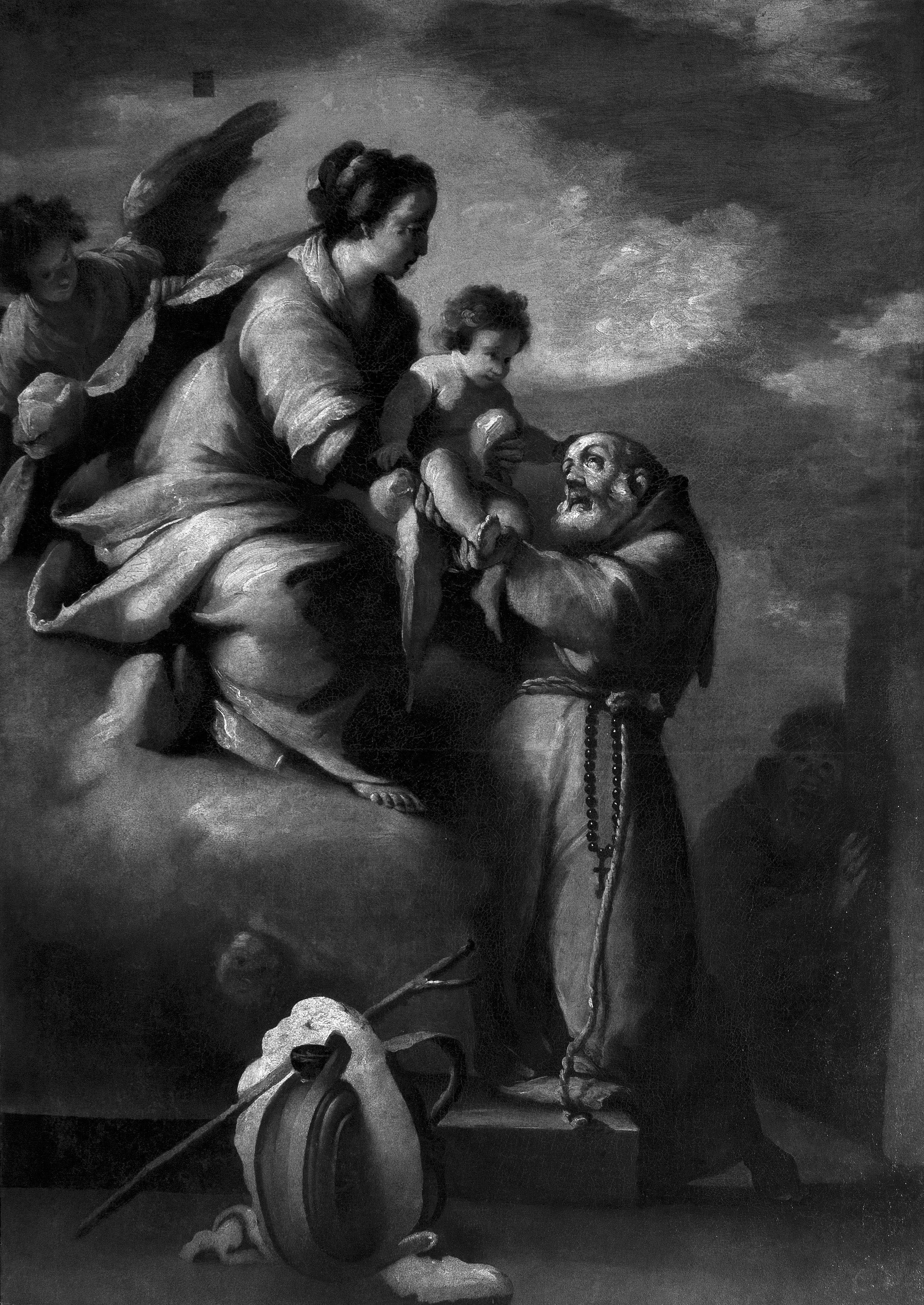 Recovered by Father Cassiano da Langasco from the Capuchin convent of Varazze  and of Santa Margherita Ligure respectively, these two grisailles depict a favourite subject in Capuchin worship: the Virgin appearing on Christmas night to Felix of Cantalice, who receives the Infant Jesus from her in the presence of Fra Lupo.

The painting from Varazze is generally agreed to be the work of Bernardo Strozzi, with Franco Pesenti being the first to present it as such for the exhibition “L’officina di Bernardo Strozzi” in 1981.

The scene's night-time setting, lit by the glow of the light coming from above, is successfully resolved by the adoption of the monochrome technique, based on cool tones and lifted by the use of whites which lend a vibrant quality to the image.

In the barely suggested space of the church, the artist places in the foreground the friar's kit for collecting alms, a superb still life, while behind the group of figures the inclusion of the clouds renders the space indistinct. The Madonna is seated on a cloud in the act of holding out the Christ Child to the saint, with an angel holding up her cloak behind her. The work is without doubt linked to the altarpiece of the same subject kept in the Capuchin church of the Santissima Concezione in Genoa, from which it differs in several respects.

According to Rita Dugoni, the monochrome is a sketch or model for the altarpiece, commissioned to Strozzi on the occasion of the Saint’s beatification in 1625.

The use of monochrome in the context of the artist's compositional processes is also evident in the Study for the Lamentation over the Dead Christ in the gallery of Palazzo Bianco in Genoa. A date prior to the 1620s was hypothesised by Franco Pesenti, who also believed the grisaille to have been designed independently and then  reused some years later to prepare the altarpiece of the church of the Concezione.

The second monochrome, which underwent major restoration work in 1965, is difficult to interpret as the original paint layer is compromised in several areas.

The painting is generally attributed to Giovanni Andrea De Ferrari. The presence of sections of remarkable quality, discernible in particular in the figure of the Virgin, in the angel's unfolded veil in the hands of Brother Felix, and of other less conceived areas featuring a more compact brushstroke, lead to the belief that the work is from the artist's studio, presumably worked on by the artist himself.

The presence of certain differences, when compared with the monochrome of sure Strozzi authorship is of some interest: a greater definition on the face of Felix, the modelling of Fra Lupo’s features, and the reduction of the knot grasped in the Angel's right hand, appear to be evidence of a stage of output falling somewhere between the monochrome of certain authorship and the altarpiece of the church of the Santissima Concezione.

Bernardo Strozzi "The Virgin and Child with San Felice of Cantalice"