Villa Doria Centurione and the tower

The building that today houses the collection was erected in different stages starting from the beginning of the 16th century, in the then and still now charming Pegli. The original architect and initial construction date are still unknown. The villa was commissioned by Adamo Centurione Oltremarino, a wealthy merchant and financier of 16th-century Genoa, active investor in “Spanish businesses” and Andrea Doria’s great friend and advisor. Their friendship consolidated through the marriage between Ginetta, Centurione’s daughter, and Giannettino, Doria’s cousin and future heir. The building, designed as a central body with corner loggias, was embellished over time by the work that Alessi led in the park to its back, where he created an artificial lake and an “enchanted island” which could be reached by boat. At first, the main entrance to the villa was located in the northern façade, directly on the main floor, just past the watchtower against pirates. The entrance on the ground floor was secondary (nowadays, it is the main entrance), reaching the main floor via a high sloping staircase.

Adamo Centurione’s strong influence and role in the political scene of the city soared after the plot of the Fieschi (1547), when he hosted Andrea Doria in Masone, who had boldly fled from Genoa. This period is coincident with the start of important fresco works for the ceilings of the Villa, lasting until 1551-1552 and engaging famous artists such as Ottavio Semino and Nicolosio Granello. Among the notable scenes are Curzio Romano, Jupiter hurling lightning and Stories of Angelica on the ground floor; Perseus freeing Andromeda, Departure of the Argonauts and the corridor with the Portrait of Andrea Doria’s profile on the main floor.

On the death of Adamo Centurione in 1568, a hereditary issue began, as Marco Centurione, eldest son of Adamo, predeceased his father. The dispute dragged on for nearly two decades, until Gio. Andrea Doria directly acquired the Villa, clearing the field from any hereditary constraint.
Gio. Andrea initiated the third phase of works to embellish the building and its surroundings, by acquiring neighbouring lands; in implementing a design dear to Andrea – direct arrival to the Villa after disembarking from the galleys –, he had a “Palazzo alla Marina” constructed, still existing on the Pegli seafront (house no. 37), as well as a linear pergola leading to the Villa.
Around 1590, Gio. Andrea Doria planned further works to renovate the Villa, overseen by architect Andrea Ceresola il Vannone, who had also supervised the renovation of the Palazzo Ducale in Genoa, including major expansions in the side wings.

The monochrome decoration of the northern façade, which was the original entrance, was commissioned to Lazzaro Tavarone, who had just arrived from the Spanish court. Also, Doria commissioned the second cycle of frescoes, which were completed in 1595-96 by Domenico Passano and Battista del Forno. Overall, the frescoes depict the themes of love and adventure taken from classical literature, which were then in fashion and suitable to life in the “countryside”.

Widowed, Gio. Andrea spent long periods with his family in the villa. The oldest “graffiti” by the in-room guards (a necessary precaution against the danger of possible conspiracies and assaults of bandits or pirates), who carved their names on the slate doorpost in the entrance, date back to that time.

In the following centuries, renovation works are limited, including the construction of the two protruding and terraced bodies, one westward and the other eastward, as early as in the 18th century as a southern extension of the villa.
After the unification of Italy, new rooms were built on the ground floor, frescoed with themes of the Risorgimento, a markedly different style than the originals. The renovation of the southern façade – which thus became the main entrance – also dates back to that time, following the urbanisation of the surrounding area.

In 1908, the villa – which belonged to the Doria Pamphilij – was sold to a real estate company, eventually passing on to the Municipality of Genoa in 1926. Used at first as City Hall, it then became the Civic Naval Museum and concurrently branch school of the grammar high school “Mazzini”.

The main floor leads to the garden and the tower. The presence of towers along the Ligurian coasts in the 16th century was due to the constant danger of corsairs.
Built at the end of the 16th century, the square tower has the typical military structure, with a batter base and jutting pediment; it has many floors connected by stairs, to a total height of about 88 feet. Once, its exterior walls were frescoed; today, some remnants of blue plaster can still be noticed on one side under the pediment. 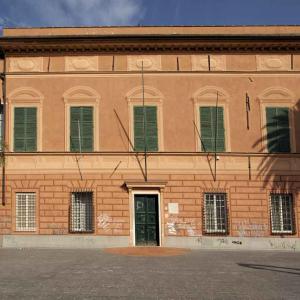 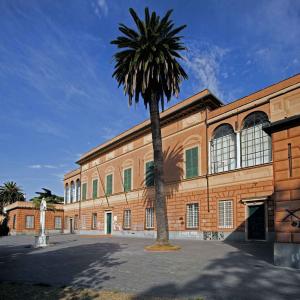 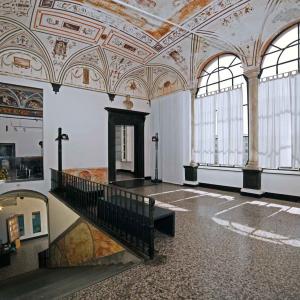 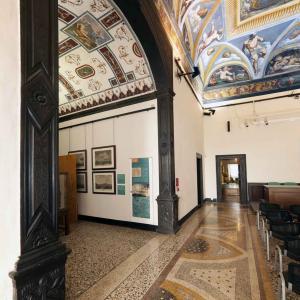 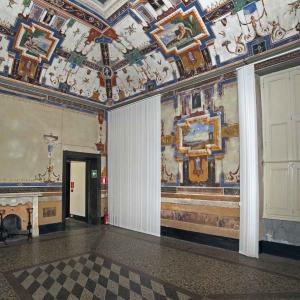 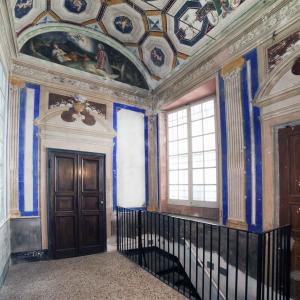