Located in the old part of the City, between the Prè and Maddalena districts, the original building, dating from the 15th century, was owned by the Adorno family. When in the XVI century the aristocracy was attracted to the new and prestigious area of “Strada Nuova”, the building began to be transformed and divided into apartments.

In 1794 Giuseppe Mazzini’s parents – Giacomo, his father, and Maria Drago, his mother – moved on the first floor of the building, in a small apartment which saw the birth of their four children: Maria Rosa (1797), Maria Antonia (1800), Giuseppe (1805), Francesca (1808). In 1809 the family moved to a new home in “Salita dei Forni pubblici”.
In 1875, the small apartment where Giuseppe Mazzini was born was purchased by “Circolo Giuseppe Mazzini” and “Confederazione Operaia Genovese” to set up a memorial, which in 1881 was then donated to the City Council.

In 1925, the whole building was declared a national monument. During World War II the building suffered serious damage due to bombings (1943); after the war the Institute resumed its activities, albeit only those relating to conservation and research, while the Museum was restored only in 1982, with the exception of some temporary exhibitions.
The current exhibition layout was totally renewed in 2005 to celebrate the bicentenary of Giuseppe Mazzini’s birth, with the support of “Compagnia di San Paolo”.

Istituto Mazziniano - Museum of the Risorgimento 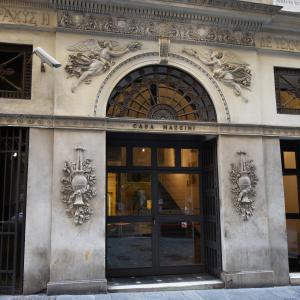 Istituto Mazziniano - Museum of the Risorgimento