He was born in Genoa on 5 September to Giorgio Mameli, Admiral of the Sardinian navy and the marquise Adelaide Zoagli Lomellini. Of delicate health, he made his first studies under the guidance of his mother. His home was frequented by intellectuals from the Genoese environment such as Jacopo Sanvitale, Teresa Doria, Michel Giuseppe Canale.

Cholera broke out in Genoa, and the family moved to Sardinia for a year, where his paternal grandparents lived.

He continued his studies under the guidance of Canale, a polygraph of great culture, at that time suspected of being a follower of Mazzini.

In 1840 he is enrolled for the first time in a public school at the Calasanzian School (a religious Order), where he studied rhetoric under the guidance of Father Agostino Muraglia. In contrast to the Jesuits, the Piarists imparted a liberal teaching; and it is here that Mameli offers the first demonstration of his poetry skills.

He enrolled in November at the University of Genoa studying Philosophy course, a preparatory step to the various university faculties, which he attends, with an interruption of two years, until 1846. Due to his exuberant temperament he recieved numerous official reprimands.

He was admitted to the degree course in Literature in November; his attendance at the university is documented until 6 December 1847.

He joined the “Entelema Society” in March, which had been founded in Chiavari the previous year and spread to Genoa in the university environment. From historical and literary themes, the Society soon went on to discuss political matters and ended up bringing together young Genoese Democrats. He gradually approached Mazzinianism by entering into relationships with some collaborators of the Exile (Filippo De Stephanis, Luigi Montobbio, Giambattista Franchini and Nino Bixio).

September: Popular demonstrations commenced following the amnesty granted by Pius IX. The Committee of the Order was formed in the milieu of intellectuals, the bourgeoisie and progressive nobility, which Mameli also joined, with the task of organizing initiatives to obtain liberal reforms in the Kingdom of Sardinia, avoiding the excesses of the masses.

November: Carlo Alberto, who granted the first timid reforms in October, arrives in Genoa, welcomed by enthusiastic events organized by the Order's Committee. In the streets the verses of the hymn "Fratelli d’Italia" composed by Mameli are sung.

December: The King leaves, demonstrations resume to obtain more organic reforms: freedom of the press, expulsion of the Jesuits and national guard. They culminate with the great procession in Oregina, on 10 December which, with an anti-Austrian spirit, celebrates the expulsion of the Germans in 1746. Mameli is among the most active organizers of the event. For the occasion, one of his patriotic compositions reads: "For the feast of December 10, 1847 in Genoa" and flies, despite the government's prohibition, the tricolor flag.

1848 January: Disagreements lead to the dissolution of the Order Committee between the Mazzinian component (Mameli, Bixio, Daneri and Remorino) and the moderates; riots and protests continue; on day 16, Mameli participates in mourning at a mass celebrated in the church of S. Siro in honour of the students of Pavia killed by the Austrians in retaliation and reads for the occasion four epigraphs.

February: The concession of the constitution is celebrated in Naples; and exultation reaches it’s peak at the announcement that even Carlo Alberto has approved the statute.

March: On the 19th, when news of the Milan uprising broke out, Mameli with 300 volunteers (Compagnia Giuseppe Mazzini) moved to help the insurgents. On the 22nd he reaches Gravellone, on the border between Piedmont and Lombardy, where he joins the Bixio group that preceded him; together they reach Milan on the night between 23 and 24 March. The Genoese join the legion of General Torres' volunteers; Mameli has the rank of captain.

April: Clashes with the Austrians on the banks of the Mincio. Mameli with his men passes to the command of General Longoni, commander of the Legion Bersaglieri Mantovani. On the 18th he goes to Milan where he meets Mazzini; he will see him several times in the following months as a spokesman for the Genoese column.

July: While the Mantuan column, gathered at the Army Corps of Lamarmora, nears the fortress of Mantua, news of the defeat of Custoza arrives.

August: After the fall of Milan and the Salasco armistice, Mameli returns to Genoa. He becomes part of the Italian club, which gathers Mazzinians and moderate liberals; he collaborates with "Il Pensiero italiano" and publishes the "Canto di guerra", composed at the invitation of Mazzini.

September: On the 14th he is the promoter of a large event at the Carlo Felice for the collection of funds for Venice; on the occasion he recites the poem "Milan and Venice", which is an invective against Carlo Alberto "traitor" to the Italian cause. Garibaldi arrives in Genoa to organize a body of volunteers. Mameli is among his most active collaborators. He then carried out a mission to Ancona for the Italian club to bring a proclamation to the Sardinian fleet to rush to Venice. Meets his father, commander of the "Des Geneys" brigade.

October: Takes over the editorship of the newspaper "People's Diary" promoting a press campaign for the resumption of the war on Austria. Garibaldi renounces the expedition to Lombardy. Mameli informs Mazzini of this. He leads a popular demonstration shouting "Long live the Constituent Assembly" violently suppressed by the police.

November: Mazzini's appeal for the insurrection in Val D'Intelvi is published in the "People's Diary". The Mantuan column reaches Garibaldi in Tuscany to convince him to go to Mazzini's aid. The news of the riots, after the killing of Pellegrino Rossi, lead him to move towards Rome.

December: Dictated the program of the Roman Committee to the association created to promote the convocation in Rome of a national constituent according to Mazzini's political dictates: popular sovereignty, war of independence, postponement of the question of the choice of form of government until after the expulsion of the foreigner.

1849 January: He publishes articles on "La Pallade" and "Il Tribuno" for the proclamation of the National Constituent. After the fleeing of Pius IX, a Provisional Government Council is formed in Rome; Mameli deals mainly with the military organization. On day 28 the elections are held in Rome. On the "Pallas" Mameli writes "the moon has risen from the Capitol. After the fall of the Pontiff King, the Rome of the people will return again".

February: Day 5 goes on a mission to Florence to convince Montanelli and Guerrazzi to form a single state between Tuscany and Lazio. On the 9th the proclamation of the Roman Republic takes place.

March: Mameli returns to Genoa and resumes his place in the opinion movement that will push Carlo Alberto to resume the war. Appeal to the Tuscans and the Romans to intervene in Lombardy. On the 24th he returns to Rome, where he recieves news of the Piedmontese defeat.

April: With Bixio he arrives in Genoa where the population has risen. Harsh repression of Lamarmora. Mameli with the leaders of the insurrection returns to Rome. He goes out of his way to defend the Roman Republic attacked by the French, participating in the main millitary events, despite his weakened physical condition caused by a persistent fever.

June: In the fighting on day 3 outside Porta di San Pancrazio, Mameli, then Garibaldi's aide-de-camp, his left leg injured with a bayonet iduring an engagement. It is his companion, a Bersagliere from the Manara legion who unintentionally hit him in the hustle and bustle of the attack. The wound seems light, but an infection progressively aggravates the patient's infirmity. On June 10 "in view of the skill and courage shown in the fact of arms of June 3" Mameli is promoted to the rank of captain of the general staff.

July: The condition of the patient worsened: to avoid gangrene, his leg was amputated on day 3, but on the 6th at half past seven in the morning, at only 22 years old, Goffredo Mameli died. On the same day, the Interior Minister Pinelli ordered the extraordinary commissioner of Genoa not to allow Mameli to return to his home city. 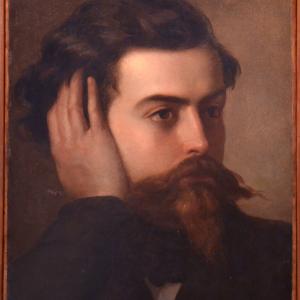