The 16th-century palazzo commissioned by Francesco Grimaldi became the seat of the National Gallery of Palazzo Spinola in 1958 thanks to a donation to the Italian State by the brothers Franco and Paolo Spinola. It had passed by inheritance from the Grimaldi to the Pallavicino, then to the Doria and finally to the Spinola, initially of the branch of the family in San Luca and later to that of Luccoli, the palazzo was donated along with a rich artistic heritage stratified over the generations; aware of its  historic importance  it was donated subject to the proviso that the appearance of the aristocratic dwelling should have been preserved as a testimony of the culture and lifestyles of the great Genoese families.

From research carried out in the archive documents, also preserved in the building, it was possible to reconstruct the contribution of the individual owners both in defining the architectural aspects, its decoration, and the development of the painting collection, delineating strongly marked personalities such as, in particular, Andaldo Pallavicino from the mid-17th century, Maddalena Doria from the early 18th and Paolo Francesco Spinola in the turbulent revolutionary era.

The current layout aims to highlight the close relationship between the figures of the palazzo’s owners and the configuration of the two “noble” floors of the building, which are presented as examples of  the residential and artistic context of the 17th-century, on the first floor the Grimaldi and Pallavicino families predominate while the second bears the imprint of the 18th-century renovation commissioned by Maddalena Doria Spinola.

The upper floors, which housed the private area of the owners on the third floor, the rooms for servants on the fourth, were heavily damaged by the bombing of the city during the last world war, rebuilt after the war they lost their historical aspect. Aware of this, the donors themselves proposed that, in return of the preservation of the residence of the noble floors, the then-constituting National Gallery of Liguria could be based here, created with the heritage that would have formed and enriched the acquisitions of the State. The floors were thus restored in a modern way and opened to the public in 1992, creating the extraordinary reality of two museums in dialogue within the same historic home. 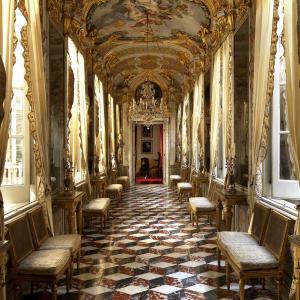