Over the years, the museum has supported intensive programmes of exhibitions, events and projects, promoting contemporary creativity with a focus on the most significant trends of the current artistic scene, curating catalogues and producing works specifically made for the villa.

At the same time, it fostered the remarkable artistic heritage of over 4000 works held within its collections, and which was growing and taking shape even before the museum opened thanks to acquisitions, donations and prizes.

The starting point for the Villa Croce collections was the collection of Maria Cernuschi Ghiringhelli.

Maria Cernuschi, wife of Gino Ghiringhelli, artist and owner of Milan gallery Il Milione, started her collection in the ‘30s, going on to develop it in a personal, coherent direction marked by her passion for abstract research. Its more than 200 works range from the early Italian Abstract art of the ‘30s, which Il Milione promoted and supported in those years, with artists such as Ghiringhelli, Reggiani, Bogliardi, Licini, Munari, and Radice, moving on to the perceptual and pre-conceptual studies of the ‘60s, with Bonalumi, Calderara, Manzoni and the experimental studies of Fontana, through to the Pittura Analitica and Nuova Pittura of the ‘70s and ‘80s, with a particular focus on the Ligurian area, frequented by Maria since the ‘40s and to which she moved in the following decade.

These lines of research are echoed in the collection of LAB – Laboratorio d'arte contemporanea della Bassa Lunigiana, (Contemporary Art workshop of the Bassa Lunigiana),  a cultural association for contemporary art promoted by a consortium of seven towns in the province of La Spezia, which became part of the Villa Croce collection in 2001. LAB was created in 1985 as a “museum of donation” from the idea of the Museo Sperimentale, built by Eugenio Battisti in Genoa in 1963-64 during his brief period teaching art at the university, and developed both the growing areas of Pittura Analitica and Nuova Pittura as well as an interest in performance and verbo-visual research. The latter theme is well documented in the Villa Croce collections, with artists such as Martino and Anna Oberto, Corrado D’Ottavi, and Rodolfo Vitone, and refers to the Visual Poetry movement which developed in Genoa, as in many other Italian cities, at the end of the ‘50s, presenting several groups experimenting with diverse approaches in an attempt to move beyond the field of painting and extend it to various forms of art, in a critical relationship with the world of communication and its mechanisms of conditioning.

The museum’s collection received a significant boost from the end of the ‘80s thanks to gallerists and artists who were both witness to and protagonists in some of the most important Ligurian artistic research since the second world war, to whom the museum dedicated major exhibitions and catalogues, especially in the ‘90s, with a particular focus on the relationship between art at the local level and at the national and international level. Among the most generous donations were 275 works, including paintings, sculpture and engravings, by Sandro Cerchi, a significant series of works by Rocco Borella, paintings and engravings by Mario Chianese, Plinio Mesciulam, Raimondo Sirotti, Beppe Dellepiane and many others.

The growth of the collection was also made possible thanks to prizes aimed at young artists: the Duchessa di Galliera prize, established by Duchess Maria Brignole Sale in 1874 to support young creative talent in Liguria and launched by the museum for the first time in 1993, and the Renato Carnevale national sculptural prize aimed at young sculptors, promoting the most innovative artistic practices.

The photographic section is also of interest, begun immediately after the museum's opening and including over 500 works, from the experimental photo-collages of the ‘20s to photos of political and social events of the ‘70s, as is the graphic art section, proof of the museum's involvement since 1986 in the dissemination of printmaking techniques.

The latest acquisitions mostly concerned work deriving from special projects specifically created for the museum's spaces, such as the wall drawing decorating a wall on the villa's first floor by Ben Vautier, the installation by Plamen Dejanoff, the large Specchiera by Flavio Favelli made for his exhibition Prima sala d’aspetto, the work created directly on the wall by Zhang Enli in the spaces of the piano nobile, and the large installation by Marta Dell’Angelo along the staircase, developing that close relationship between museum and artist which has always been at the heart of all Villa Croce’s activity. 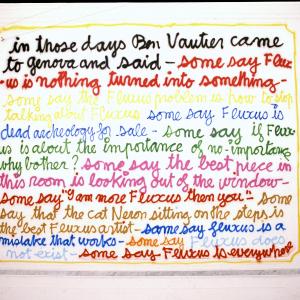