Among the most frequently recurring artistic themes in the collections of the museum, one can identify the abstract vein which represents a unifying element which runs throughout the works constituting a kind of Ariadne’s thread uniting the entire collection.

In fact, the initial nucleus and the heart of the collection is represented by the collection of Maria Cernuschi Ghiringhelli exhibited in February 1985 to inaugurate the opening of the Museum of Contemporary Art in Villa Croce and purchased by the Municipality of Genoa in 1989.

Maria, wife of Gino Ghiringhelli, painter and owner of the Milanese gallery Il Milione, began collecting in 1940, starting with a canvas by Ghiringhelli and an etching by Reggiani, enriching her collection over time to more than 200 works, the collection was guided by totally personal criterion but maintaining a true sense of contemporary culture.

From 1932, the Il Milione gallery strove to promote the most advanced European artistic language, presenting international artists such as Fernard Léger, Pablo Picasso, Wassili Kandinskij, who exhibited for the first time in Italy, and attracting artists and critics supportive of Lombard Abstract Art.

The first Italian Abstract Art Exhibition entitled ORESTE BOGLIARDI, VIRGINIO GHIRINGHELLI, MAURO REGGIANI, opened in November 1934 at the Il Milione gallery, accompanied by a “Declaration of the exhibitors” signed by the three artists, a true manifesto of the group that explained the beliefs of the signatories.

The influence of the research of the Dutch Neoplasticist Movement is clear, expressed in 1917 by Piet Mondrian and Theo Van Doesburg, who wanted to bring art to “absolute formal purity” without reference to changing reality, using geometric shapes and primary colours to pursue a goal, which was also ethical, orderly and rational. The neoplasticist artist Friedrich Vordemberge-Gildewart had exhibited at the Milione immediately before the 1st Italian Abstract Art Exhibition and his compositions provided inspiration for several of the artists.

Another important factor was the influence of the architect Giuseppe Terragni and the group of rationalist architects from Como as well as the influence of the somewhat eccentric, but passionate, figure of Carlo Belli, cousin of Fausto Melotti, whose text “Kn”, considered (though with a certain poetic license) the bible of the abstract artists, exhalts the total autonomy of art over nature, a text that Belli dedicated to Maria Cernuschi, the "stimulating adept" of the movement.

The first exhibition was followed in 1935 by others dedicated to the individuals most interested in the new research: in 1935 Lucio Fontana with his abstract sculptures (all of which remained unsold), followed by Atanasio Soldati, Fausto Melotti and Osvaldo Licini who, with his Open letter to the friends of the Million, published in catalog n. 35 of the gallery, enthusiastically joined the group and who considered Maria Cernuschi "the keenest connoisseur of art" and a true inspiring Muse of his work. In the same year, the first collective exhibition of Italian Abstract Art was hosted in Turin in the studio of the artists Enrico Paolucci and Felice Casorati.

Composition n. 5 by Gino Ghiringhelli and Composition R 3 by Mauro Reggiani were among the 28 paintings exhibited in the 1st Italian Abstract Art Exhibition, they reproduced on the cover of the gallery’s catalog n. 32, both now form part of the museum's collections, as do Reggiani’s  etchings from  1934.

The starting point of these artists, as announced in the Declaration, was the need for a new classicism made of balance & synthesis and supported by will, order and passion.

A personal and independent view was expressed by Osvaldo Licini who, in the aforementioned self-presentation Open letter to the “friends of the Milione” expressed his poetics as: “Painting is the art of freely conceived colours... and it is... an irrational art, with fantasy and imagination predominating, that is, poetry "

Among the leading figures of artistic research the museum preserves works from the 1930s of notable importance, such as the 3 precious "Ardoise" by Alberto Magnelli of 1937, a rare oil on wood by Bruno Munari also from 1937, the Orange Composition from 1938 by Mario Radice and 3 compositions by Atanasio Soldati. These last two artists were a go-between in the continuation of abstract research in the years following the war.

In fact, the concepts supported by the abstractionism of the 1930s were taken up and re-proposed by the Concrete Art Movement - MAC founded in 1948 in Milan by 4 artists: Gillo Dorfless, Atanasio Soldati, Bruno Munari and Gianni Monnet. Many other figures soon joined, creating mixed groups in various Italian cities, including Genoa upto 1958. By Concrete Art we refer to an art that was not a reproduction of reality, naturalistic or an expression of feelings but produced self-sufficient images, concrete notes, shapes and colours created by the artists based on their intuitions. The connecting artist between the first abstractionism and this new movement was Atanasio Soldati, to whom we also owe contacts with the artists of Genoa, Plinio Mesciulam and Giuseppe Allosia who interpreted the concrete philosophy in a less rigid way. The museum houses important works from the 1950s by Mesciulam that show this particular vision of concrete abstract perception, with the use of acid colours and sharply pointed shapes, such as those by Giuseppe Allosia, who in his compositions is closer to the eddies of the Nuclearists and to the dripping of Action Painting. 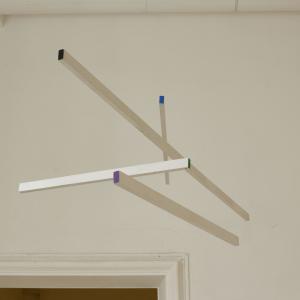