International post-impressionism between Europe and the USA

Few foreign artists are included in the Frugone collection, but they are undoubtedly some of the most significant protagonists of international post-impressionism. Five works by the American Richard Miller (Saint Louis 1875-1943), intended to illustrate some key moments of his career: first of all La vecchia olandese, a suggestive painting linked to the experiences of the American James Abbot McNeill Whistler and exhibited at the Venice Biennale of 1905, where the painter was greatly appreciated both by the artistic world - by Umberto Boccioni, for example, who possessed a postcard sized copy - and by European collectors, and where the canvas was purchased by a certain Carlo Grosso. The work appears in 1914, in the catalogue of the last exhibition in Buenos Aires organized by Stefani and, after 1918, in the Luigi Frugone collection.

Also Madre e figlia, a solid genre painting in which coral red returns as the protagonist to accent the faces of the two figures, was exhibited by Miller at the Biennale in 1907, with two other paintings, all immediately purchased by Stefani for 4.500 lire in total, and was sold to GB Lazzaro in 1918 for 2.500 lire. The palette changes in In giardino or Beau jour d'été, a happy impressionistic feat that Miller would have made between 1910 and 1911, when, with other artists of the "Giverny Group", fascinated by the beauty of the famous garden, he had stayed at Giverny with Claude Monet. Whereas Mulino a vento testifies to the American artist’s trip to Holland in those early years of the 20th century.

On the opposite side of the room there is the work of the Parisian artist Lucien Simon (Paris 1861-Combrit 1945), with the beautiful painting La poupée; follows La fanciulla Indiana by Allan Edmund Beeton (London 1880 - Reading 1942), severe and dramatic portrait, still with Flemish tones, perhaps of his usual model Rita des Iles - very far  from the mannequins and toys that will appear in the English artist's fascinating later works - the painting was presented at the 1926 Biennale, where Ferruccio Stefani bought it for the sum of  200 pound to sell it immediately to Luigi Frugone.

Two exceptional works by Joaquín Sorolla y Bastida (Valencia 1863- Cercedilla 1923) close the room: Sonnellino in barca, dated 1895 and 1896 to highlight the fact that the artist worked on it in different moments, and Ritorno dalla pesca of 1904. 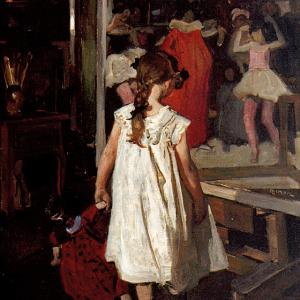 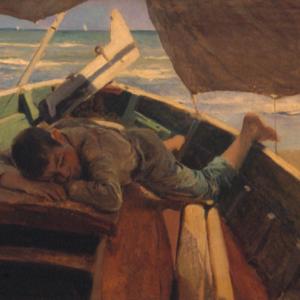 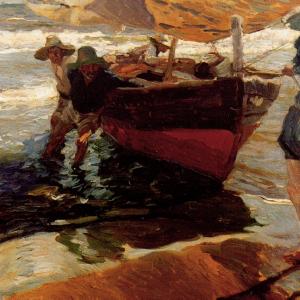 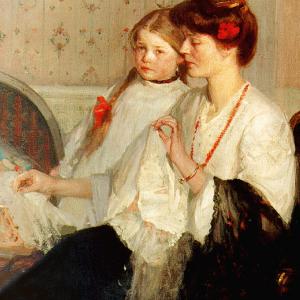 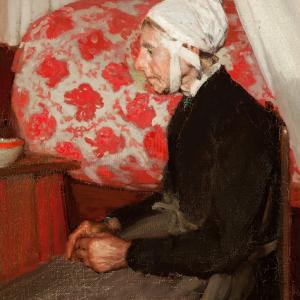 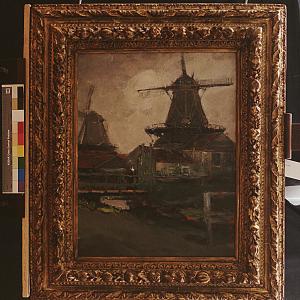