From the room of the artists active in Venice, you enter the space dedicated to some of the protagonists of the most significant experiences that took place between Lazio, Campania, Abruzzo and France. We refer to the names of the brothers Giuseppe and Filippo Palizzi, and their near contemporaries Antonio Mancini (Albano Laziale 1852 - 1930) and Francesco Paolo Michetti (Tocco di Casauria 1851 - Francavilla al mare 1929).

Giuseppe Palizzi (Lanciano 1812 - Paris 1888), trained in the Neapolitan academic environment, soon left Italy for the French capital and settled on the edge of the Fontainbleau forest, looking in particular to the landscape painters of the Barbizon School. Splendid canvas measured on a fresh naturalism, attributable to the eighteen eighties, la Pastorella al monte was purchased by Luigi Frugone, with L’Amaca by Giuseppe De Nittis, for the substantial total sum of 60,000 lire, at the collection of Antonio Fradeletto, general secretary of the Venice Biennale from 1895 to 1919, thanks to Stefani's mediation. Alongside Giuseppe's work, there are also two paintings by Filippo Palizzi (Vasto 1818-Napoli 1899), to which an intense correspondence was linked: Stalla con due asinelli e tre figure from 1871 and Gli amici from 1872, a captivating painting of confident execution that reveals the lenticular and almost tactile rendering of those values measured on the truth in nature to which he had adhered since frequenting the Macchiaioli artistic environments, in Florence, while later pursuing various chromatic solutions.

With some sculptures by Vincenzo Gemito - a post mortem edition of his Acquaiolo and two bronze heads perhaps finished by the same sculptor -, a Bacco bambino by Cesare Ravasco and a beautiful wax by Domenico Trentacoste, taken directly from a plaster or a marble version in 1896, (these are now exhibited, respectively, at the Municipal Gallery of Modern Art in Turin and at the National Gallery of Modern Art in Rome). Two works complete the visit to this hall, both by Francesco Paolo Michetti, the famous Abruzzese painter who first fixed the images he was to paint in photographic plates, now preserved at the Alinari Foundation in Florence and the National Gallery of Modern Art in Rome. The refined and mischievous Fanciulla Abruzzese, dated to the eighteen eighties for its decadent tone, depicts a girl with dishevelled blond hair as light as foam, dressed up, with earrings, a seed necklace, crosses and medallions around her neck, and a bouquet of wildflowers in her hand. It is a recurring figure in the works of the artist from Abruzzo, who was a friend and protector of Gabriele D'Annunzio, illustrator of his tragedies, as well as animator of a cultured circle of artists, writers and musicians in his home-studio at the Conventino in Francavilla sul Mare. The quality of the painting is enhanced by the preciousness of the antique French frame. Dated to about 1888 is a canvas painted on both front and back, with some faces of great intensity: on the front, a female head with a gaze immersed in a liquid and poignant melancholy, made in tempera and pastel, in strictly white and black, as if it were a frame of silent cinema. On the reverse of the canvas can be seen various faces, including the magnificent one of his friend Carmelo Errico, poet, lawyer, musician and friend of D'Annunzio, a frequent visitor to the Michettian circle. 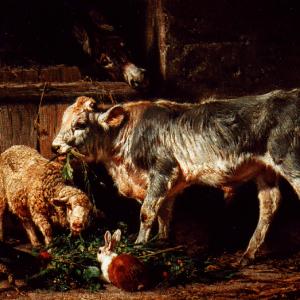 The artist's daughter with a straw hat 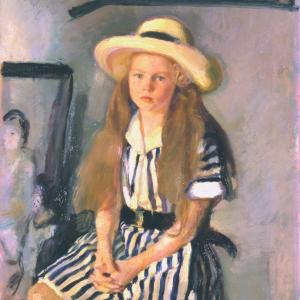 The artist's daughter with a straw hat

Shepherdess on the mountain 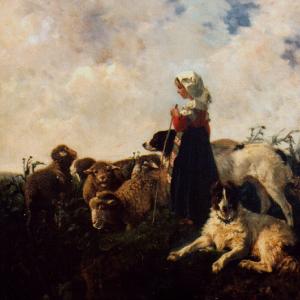 Shepherdess on the mountain 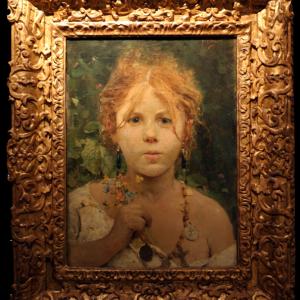 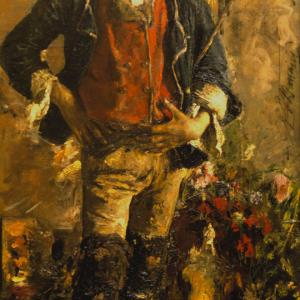 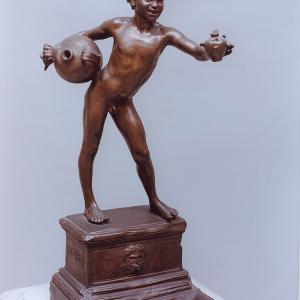