The Japanese term shippō (in Chinese qibao), which means "seven treasures", is taken from an ancient Buddhist phrase referring to the "seven precious things" - gold, silver, lapis lazuli, crystal, agate, ruby and carnelian: according to some this may suggest the idea that the enamels were originally created as substitutes for precious stone inlay.
Polychrome glazes are obtained from vitreous materials (silicates) reduced to a powder and mixed with dyes (metal oxides). Heated to temperatures between 850 ° and 900 ° C, the coloured silicates melt, taking on a hard and glassy consistency
The decoration of metal surfaces with polychrome enamels is practised using three different methods: painted enamel: applied with a brush (also called "Canton enamel); champlevé enamel, which consists in filling specially made cavities in the bottom of the metal surface with coloured silicates; and lastly which is the most widespread and consists in executing the design on the metal bottom with thin metal “curbs”, creating frames that are then filled with coloured silicates.

In China, during the Ming (1368-1644) and Qing (1644-1912) periods, the workshops controlled by the imperial house created enamel works of the highest technical and artistic quality, so that cloisonné enamels were considered typical products of Chinese decorative arts. In Japan, however, the manufacture of enamels is among the more recent decorative productions. During the Muromachi (1393-1572), Momoyama (1573-1603) and Edo (1603-1868) periods, cloisonné enamels imported from China were collected by connoisseurs, preserved in temples and used in the tea ceremony.
During the Edo Period enamel decoration was performed only on small objects, especially ornamental complements to architecture, furniture and on elements of swords. During the Meiji period, Japanese enamels were presented at the Universal Exhibition in Vienna in 1873 and this contributed significantly to raising awareness and appreciation in selected areas of international collecting. 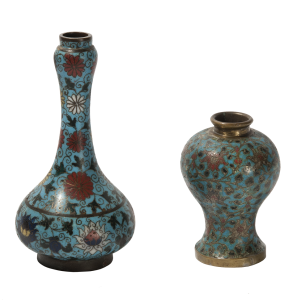 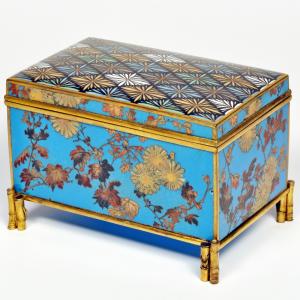