Japanese theatrical masks are the result of the art and talent of specialized sculptors: rather small and modelled in order to obtain various expressive effects by exploiting the play of light and shadow, they are carved from a single piece of wood, usually cypress, painted with polychrome lacquers and paints.

Classical Japanese theatre, called Nō o nugen nō, 'dream show', is a stage performance consisting of acting and dance accompanied by music, it deals with tragic and heroic themes and makes use of sumptuous costumes and painted carved wooden masks. The canonical form of the Nō still practiced today was perfected by Kan'ami and his son Zeami Motokiyo (1363-1443) in the XIV-XV centuries, with the patronage of the military aristocracy. We can divide the Nō (nōmen) masks in the Chiossone collection into main categories: Okina, an old and venerable man; Kishin, ogre oni or demon; Jō, divinity with the aspect of old man; Onna, woman; Otoko, man and Onryo, ghost or spirit.

The Kyōgen is a farce based on satirical or amorous dialogue and constitutes the comic interlude of Nō drama. The kyōgen masks, unlike the nōmen, have ambiguous and grotesque features (display case 12).

Bugaku, also called Gagaku, is a synthesis of music and dance of Chinese origin introduced to Japan in the Nara Period (645-794), which developed and established itself during the first half of the following Heian Period (794-1185). Bugaku spread and became very popular in the Muromachi Period (1392-1568): a typical subject is the mask of the Dragon King of the sea Ran Ryō-ō, which can be found in display case 13. 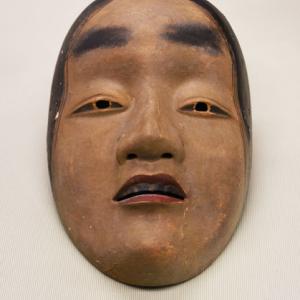