The birth, development, flourishing and decline of wooden sculpture in Japan coincides exactly with the historical progress of Buddhism: after the great flowering of the VIII-XIV centuries, wooden sculpture progressively declined in the Muromachi Period (1393-1572). Traditionally, the Buddhist wooden sculpture have been covered with colours, lacquers and leaf gilding that have greatly enhanced its expressiveness. The main wood carving techniques, in chronological order, are the following:
Ichiboku zukuri, "one piece wooden structure". This sculptural technique spread from the end of the Nara period (late VIII century) until the first Heian period, but declined in the latter part of the X century. The method consisted in sculpting the whole statue, or at least the head and torso of the figure from a single piece of wood.
Yosegi zukuri, "structure of assembled pieces of wood".
This method was originally developed towards the end of the 10th century to build Buddhist figures so large that they could only be executed in many separate pieces: each of the pieces, chosen specifically for the particular part of the figure, was carved, hollowed out internally (uchigurishi) and finally assembled with the others. The large sculptures thus obtained were very light and tended not to develop cracks.

Warihagi zukuri, "divided and reassembled structure".
This method, which spread from the 11th century onwards, consists of the following technical phases: the sculpture is roughly hewn from a single piece of wood is divided longitudinally into two halves or sometimes even into four quarters; the head is separate from the body under the “three folds” (sandō) which usually marks the neck of the Buddhist figure. The head, the two halves and / or quarters of the figure were then excavated internally (uchigurishi) to prevent the formation of cracks during the ageing of the wood. The parts of the sculpture were then reassembled and the finishing, smoothing, grouting, colouring, lacquering and gilding were carried out.

In the Edo Period (1603-1868), a kind of devotional, non-professional sculpture with a strong “naif” character developed in rooms of Zen clergy: these rustic and naif figures are summarily hewn with natabori axe strokes from a single wooden block. 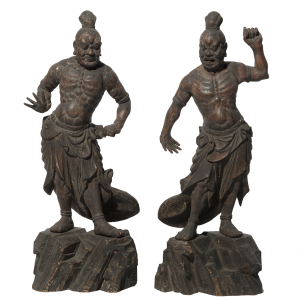 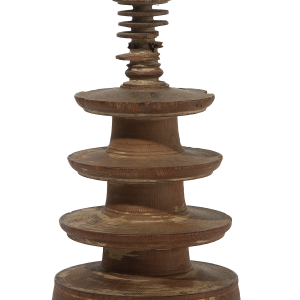