Buddhism was originated in India in the 6th century BC and was introduced to Japan through China and Korea in the first half of the 6th century AD. Since then production of Buddhist sculptures has been copious at all times.
Buddhist deities fall into the following simplified iconographic classification:
Nyorai (Sanskrit Tathāgata) are the Buddhas who have achieved perfect enlightenment: among them are the historical Buddha Śākyamuni and the Five Transcendent Buddhas revered in salvationist and esoteric currents of the religion, clearly identified by posture, lotus-shaped thrones, their hand gestures and characteristics.
Bosatsu (Sanskrit Bodhisattva) are those deities who, despite having achieved enlightenment, have renounced nirvāņa in order to devote themselves to the salvation of suffering creatures. They look princely, are adorned with jewels and usually have their hair styled in a knot at the top of the head.
Myō-ō, "King of Light", are five deities of ancient Hindu origin who perform the function of protectors of the faith in esoteric Buddhism (Mikkyō): they have a muscular appearance, dynamic pose, furious expression, they carry weapons and are surrounded by flames. The most revered among them is Fudō Myō-ō (Acala).
Shitennō, "Guardians of the four directions" (Sanskrit lokapala), protectors of the cosmos and sacred space of the temple, usually have Central Asian physiognomies and a fierce expression, they wear armour and weapons and crush demons under their feet.
Ten (Sanskrit deva), originally were Hindu gods, such as Indra (Bonten) and Brahma (Taishakuten), they were subsequently absorbed into the Buddhist pantheon with the function of guardian deities.
Japanese Buddhist sculpture is made using various techniques and materials, and is represented in the Chiossone collection by works in both wood and bronze.
- Bronze sculpture. The most important flowering of cast and gilded bronze sculpture dates to the Asuka and Nara periods (552-794) and is commonly called kondōbutsu (first gallery, display case 3).
The hall houses monumental bronze works from Buddhist temples, dated or datable to the 17th-18th centuries: five Buddhist torō lanterns, two pluvial vases for floral offerings, three large crane-shaped incense burners and a karashihi (Chinese lion ), a mythological animal typical of Buddhist iconography.
The large Buddhist deities displayed in the hall are: Juichimen Kannon stante (Bodhistattva Avalokitesvara -  mercy with eleven heads), 17th century; Shakamuni nyorai (historical Buddha Śākyamuni), dated 1694; Sho Kannon (Bodhisattva Arya Avalokitesvara), dated 1727; Monju bosatsu with nyoi scepter (Bodhisattva Manjusri) dated 1705; the transcendent Buddha Dainichi Nyorai of Taizokai (Buddha Mahavairocana) dated 1773; Fudō Myō-ō (Acalanatha, The immovable King of Light) 17th-18th century.
- Wooden sculpture (display cases 10-11). This was the most common form of Buddhist sculpture of the Heian period. The ichiboku zukuri technique dates back to the end of the eighth century, in which the main body of the sculpture consists of a single piece of wood. During and after the Heian Period, two techniques spread: yosegi zukuri, consisting of interlocking various pieces of wood, then hollowed (uchigurishi); warihagi zukuri, method consisting of cutting the wood in two halves, hollowing them out and then rejoining them. 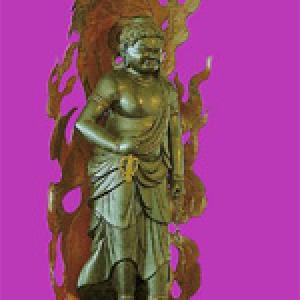