The Bibliographic Collection of the Oriental Art Museum 'E. Chiossone'

The bibliographic collection of the Museum of Oriental Art 'E. Chiossone ' has more than a thousand titles on art, culture, history of the East, principally related to Japan.

The collection has gradually formed over the years through the addition of various donations of single texts or entire private libraries, as well as from the acquisition of specific texts useful for the studies and research of the scientific staff of the Museum, and composed laregely of essays, catalogs, specific literary texts and periodicals, both in Western and Eastern languages.

The most recent donation, by the heirs of Luigi Bernabò Brea (Genoa, 1910 - Lipari, 1999), consists of the "Japanese library" of the illustrious Genoese archaeologist, who was the first to compile a catalog of ukiyo prints contained within the Chiossone Collection, published in 1979 in collaboration with the Japanese scholar Eiko Kondo.

The volumes of the bibliographic collection of the Chiossone Museum are available for consultation only, a privilege granted to researchers and scholars who make a justified request. 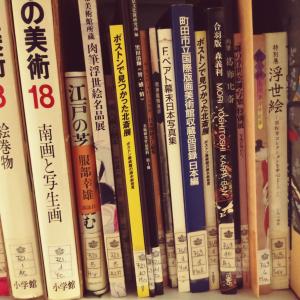