Galleys, between History and Art

The visit of the Museum continues on the first floor. A corridor with a side view of the Galley allows visitors to admire its stern, troves and rare works of the time. The works displayed on the first floor allow visitors to go back in time, to the period from the beginning of the 16th century to the last decade of the 19th century.

From the first floor, the visitor can see the 17th-century Genoese galley’s bridge, crossed in the middle by the corsia dell’aguzzino (torturer’s lane), which passes between the banks of oars, and ends in the “carrozza” (carriage), where the lords and distinguished passengers were used to sit. “Galley” derives from the Byzantine Greek “galaia”, meaning swordfish, and in fact the ram bow has a very similar shape to this fish

A Journey back to the Time of Galleys

The section dedicated to the journey back to the time of galleys and of the Shipyard of the Republic of Genoa ends with the recollection of the arrival in Genoa of the treasure chests full of silver, brought from Spain to Genoa aboard the Genoese galleys. These “remittances” were the repayment with interest of the loans granted by the Genoese patricians and represented an extraordinary source of wealth, which allowed the city’s traders - bankers to build their palaces and villas.

Between the 16th and 17th century, geographical discoveries open new horizons on lands and seas that were unknown up to that time. Two great globes, the celestial and terrestrial one by Coronelli (1688) and the extraordinary Galata cartographic collection confirm the geographical and ethnographic knowledge of the time, among great intuitions and naive errors. From March 2012 new multimedia tools will allow virtually leafing through, by geolocalizing to the present day, the 17th century maps, a symbol of the discoveries, of the world and journeys. 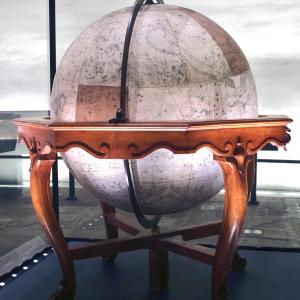