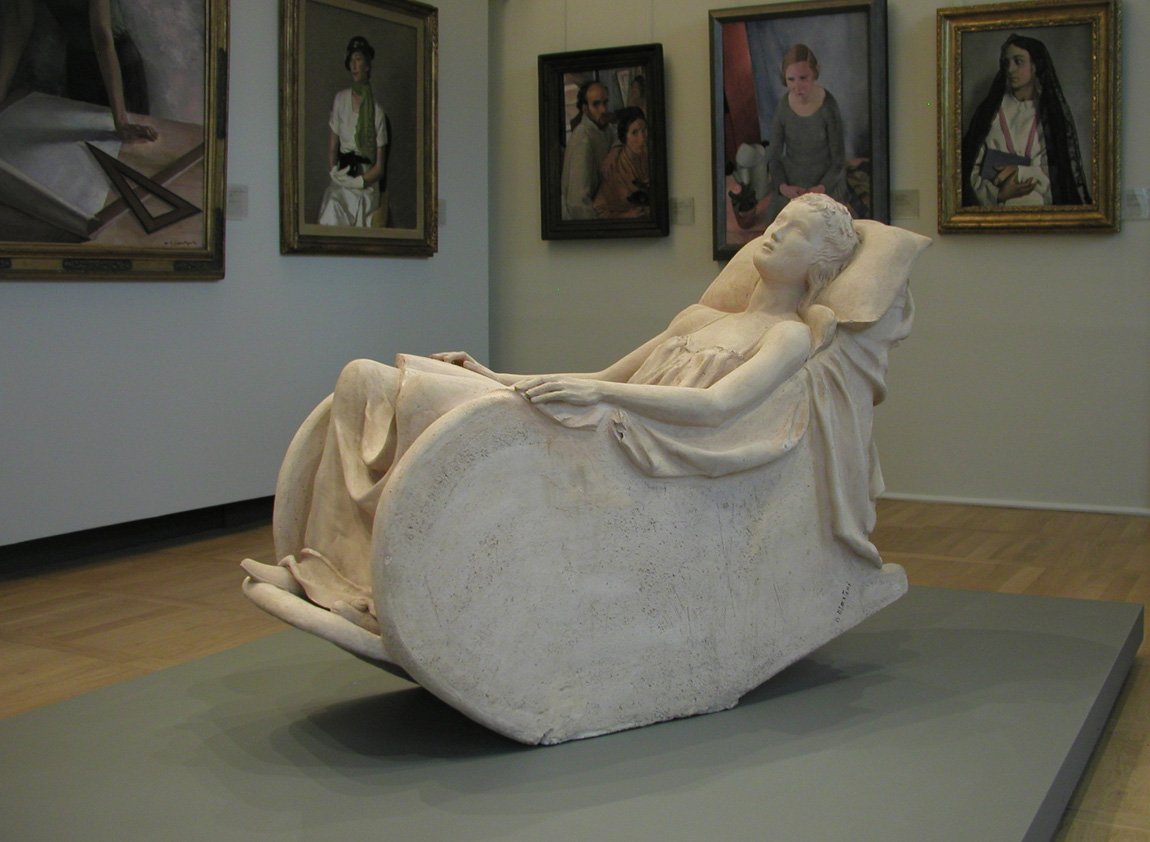 Back to Focus:
The magical 20th century of the Modern Art Gallery: from Felice Casorati to Filippo De Pisis, from Francesco Messina to Renato Guttuso
Author/ School/ Dating:

Purchased from the artist in 1932

One room is dedicated to the splendid terracotta of “La Convalescente” by Arturo Martini, one of the most exciting works in the museum, created by the sculptor in 1932 - and bought by the Municipality of Genoa directly from the sculptor for the sum of 12,000 lire -, a period in which the sculptor read Leopardi and viewing Etruscan funeral sculpture. The artist, who had his studio in Vado Ligure, where, for a number of reasons, he had moved from Treviso at the outbreak of the First World War marrying a young woman from the Ligurian town, inspired by the face of his daughter Maria (the "Nena"), transfigured and absorbed in a timeless, archaic and distant atmosphere and, precisely for this reason, of universal and profound human intensity, the limbs exhausted and racked by illness .
A human and tragic intensity that also transpires from the tone of his Nativity scene, a sort of decorative "scarabattola" in coloured ceramic with evident faults from the baking process exhibited at the III International Exhibition of Decorative Arts in Monza in 1927 and coming from architect Mario Labò’s collection.
No less important are the sculptures surrounding Martini's “Convalescente”: those by Giovanni Prini (Genoa 1877- Rome 1958) and Libero Andreotti (Pescia 1875- Florence 1933). The first with a “family Idol”, a bronze of 1927, of Decò style with oriental touchs in the yoga posture of the figure: the second a the sublimation of the archaic myth, that of Orpheus singing, dated to 1930, rendered with expressionist deformations in the limbs in a rough martinian plasticism.
Sheet 8: Felice Casorati, Portrait of a girl, 1930, oil on canvas pasted on plywood, 100 x 69 cm.
Other works, this time painted, of exceptional quality crown the "Convalescente" room, mostly purchased at the Venetian Biennials, including paintings by Antonio Giuseppe Santagata (Genoa 1888-1985), Ferruccio Ferrazzi (Rome 1871-1978 ), Alberto Salietti (Ravenna 1892-Chiavari 1961) and Baccio Maria Bacci. Of particular quality, a substantial and material Ingres style nude in the painting “Lo Specchio-Studio” by Felice Carena (Comiana 1876- Venice 1966), exhibited at the 1928 Biennale. “The antique head” by Piero Marussig (Trieste 1879- Pavia 1937) ), inspired by Renaissance portraits in profile, with a floral attribute; and the icy portrait of “Giovanetta”, 1931 or 32 by Antonio Donghi (Rome 1897-1963), a 20th -century reinterpretation of “the Madonnas“ by Antonello da Messina.
At the 1930 Venetian event, an absorbed and melancholic “Portrait of a Girl” by Felice Casorati (Novara 1883-Turin 1963) was purchased, which offers, on the recto, evidently disowned by the artist, an interesting nude with a sketch of male figure with the sports paper (Gazzetta dello Sport). A "soft" palette, with pastel effects, playing on blue and pink contrasts, connotes the resigned figure of the girl and the quotidian context in which she is immersed by the artist. It was a difficult choice, that of Casorati's painting: and much delayed by the Municipality of Genoa, and, in particular, by Orlando Grosso, the director of the Fine Arts Office, and of the Commissions dedicated to the national and international events. Unfortunately, all the works with nudes were discarded - as was the case with Arturo Martini's sculptures - and so it was not possible to acquire a portrait of Daphne Maughan, the painter's wife.