Villa Saluzzo Serra between stables, noble chapel and romantic views of the park

Having crossed the main entrance of the park at the beginning of Via Capolungo, with an arch surmounted by sculptures from the second half of the 18th century, you will find, on the left, the ancient family chapel which still preserves an 18th-century monochrome stucco decoration with the heraldic arms of the Serra family, reproduced, among the claws of a griffin, also on the fence of the park.

Of particular quality is the slate and marble floor with an articulated design dating to the 18th century; the balustrade and altar in polychrome marble is of the same period. The altarpiece depicting the Madonna and Child and, from the right, Saint Ursula, Saint Sebastian, John the Baptist and a fourth unidentifiable saint, restored in 2004, is of Genoese origin and dateable to the 18th century.

Continuing to the left of the chapel, leaning against the wall of the park, in front of the children's play area, there is the café-restaurant, built in one of the villa’s antique greenhouses, and the 19th-century stables, decorated with simple and elegant scrolls and characterized by lowered arches that divide the various spaces.

Worth mentioning are two splendid monumental palm trees, two iubae chilenses located at the entrance to the stables. Returning to the villa, home of the Gallery of Modern Art, it is possible to admire, in the space in front of the museum, a romantic grove with stream and pond; while on the western side of Villa Serra Saluzzo there is, simple but elegant 19th century basin with fountain. At the end of the park of Villa Serra Saluzzo, beyond the railway bridge, it is possible to see the open pavilion, with fake rock and stalactite decorations, from which, through a short staircase, you access the terrace above, a panoramic view point of the Gulf of Genoa. 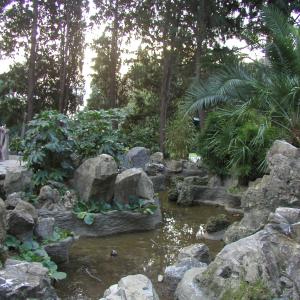