The works displayed in the last exhibition space on the ground floor are dedicated to some famous figures of Genoese history and culture. Three works focus on the iconography of Columbus: the “Colombo giovinetto” by Giulio Monteverde, original plaster model from 1870 for the marble figure now in the Castello D'Albertis Museum in Genoa, dressed up as a troubadour, interpretation of the myth, in which the young Columbus, seated on a pier looking to sea gazes at the horizon with dreamy eyes, presaging perhaps his great enterprises; “Cristoforo Colombo alla corte di Spagna” (1862), a watercolour on paper by Francesco Gandolfi, preparatory work for the fresco of the old hall of the city council in Palazzo Tursi, historical seat of the Municipality of Genoa and today a museum; “Cristoforo Colombo di ritorno dalla scoperta dell’ America” (1863) by Lorenzo Delleani (Pollone 1840 -Turin 1908) a work with a theatrical flavour which narrates, once again with troubadour costumes, the return of Columbus to Spain in chains, like the monkey close to him, because accused after the third voyage, of having taken possession of the crown's assets.

In the same area are displayed portraits of the famous violinist Nicolò Paganini, produced in 1836 by Giuseppe Isola (Genoa 1808-1893) and another by Pelagio Palagi (Bologna 1775- Turin 1860); Also by Isola is the painting dedicated to the Genoese admiral Andrea Doria who rejects the crown of Genoa, a sketch for the curtain of the city’s theatre of the same name, which no longer exists. The painting by Camillo Pucci (Sarzana 1802-1869) also refers to Charles V's admiral, Andrea Doria this time receiving the naval ensign, 1835, this painting comes from the collection of the Duchessa Di Galliera.

In memory of the figure of Giuseppe Verdi and his long stays in Genoa between 1866 and 1900 is the plaster model of Giulio Monteverde for the bronze bust of 1902, preserved in the Rotonda Monteverde del Senato at Palazzo Madama in Rome.

Our journey regarding 19th century themes ends in the ninth room with works that document the subject of the upper-bourgeois and aristocratic portraiture of the second half of the 19th century through a series of Ligurian, and a number of other, artists.

Note the refined portrait of Margherita di Savoia made by Giulio Monteverde; the portrait, oil on canvas, of the writer, journalist and caricaturist Luigi Arnaldo Vassallo, known as Gandolin, director of the Genoese newspaper "Il Secolo XIX", immortalized with his sketchbook by the lively brush of Enrico Lionne (Naples 1865-1921) in a casual "snapshot" of 1895.

Evan Mackenzie, portrayed in 1902 by the painter Luigi De Servi (Lucca 1863-1945), was a Scottish insurer from Genoa of Lloyd's of London and client of the Florentine architect Gino Coppedè who, for him, transformed an old building on the Genoese hills into a flamboyant castle with a thousand historical-artistic references, still known today as Castle Mackenzie.

The refined Portrait of Marie Joséphine [Mirette] Tanska Cambiaso of 1879, donated in 2010 in memory of the art critic Vitaliano Rocchiero, is a canvas on which the painter Sante Bertelli fixed the features of the Polish noblewoman (1860-1935), bride of Marquis Luigi Cambiaso. Raised in Paris, rich and eccentric, with international tastes and wide cultural interests, she was eventually committed with her painter daughter Stefania in the Genoese asylum of Quarto where she died, Mirette gave life to a “salon” frequented by artists of the time, in an original residence in the Piedmont countryside near Basaluzzo dedicating herself personally to the design and production of all the furnishings of the house.

On the staircase there are two very important paintings: the gloomy "Ritratto di Donna Giulia Lavaggi Centurione Scotto", made in 1884 by the famous German symbolist painter Franz von Lenbach (Schrobenhausen 1836 - München 1904) who undoubtedly made use of a photograph of the noblewoman, and “Rose Bianche” by Pietro Gaudenzi (Genoa 1880-Anticoli Corrado 1955). This portrait, dedicated to his wife Candida Toppi.

The visit ends on the mezzanine floor of the villa where the visitor can admire the self-portraits of many artists, including those of Alberto Helios Gagliardo, Federico Maragliano, Giulio Monteverde, Siro Penagini, Giovanni, Tullio Salvatore and Antonio Orazio Quinzio, Antonio Giuseppe Santagata, Severino Tremator. 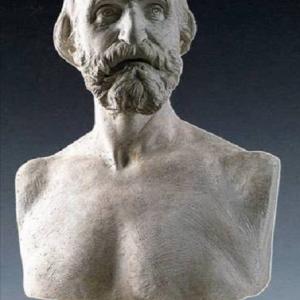 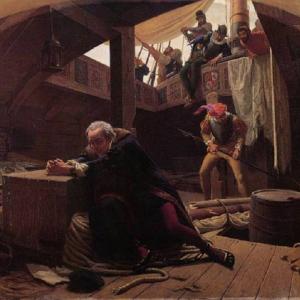 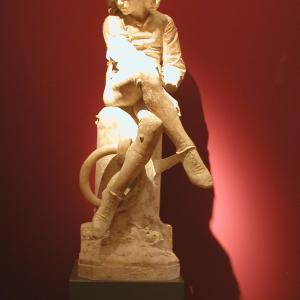 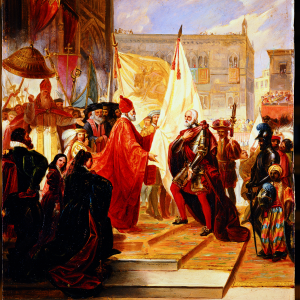