“And the studio is what it must be for a special artist. Large with a superb vault, it has large windows, where the light rains down and waves of perfume enter in May. The sculptor wanders around it, encircled in a white stole, held at the sides by a large leather belt, and the head shaded by a velvet cap," so wrote the poet Clelia Bertini Attilji about Giulio Monteverde (Bistagno 1837- Rome 1917), who painted her portrait. Official sculptor of post-unification Italy, senator and freemason, he was a very active sculptor in many Italian cities and creator of new secular iconographies, linked to themes of scientific progress.

From the studio of the Piedmontese sculptor come 40 works, including original models, sketches and studies modelled by the same sculptor, which were donated to the city of Genoa by his daughters in 1919, of these come some works exhibited in the fourth room: “Il Genio di Franklin” (1871), “L’Ingenuità” (1872), “Putto che scherza col gallo” (1875).

Two display cases, in the same room, are dedicated to the figure of Olimpia De Filippi Sella, superb terracotta of 1876 signed by Monteverde, and to some draft models always in terracotta, refined ideas for important creations such as the Monument to Vincenzo Bellini in Piazza Stesicoro in Catania ( 1883) and the tomb of the architect Carlo Sada (1876 ca.), designer of the Turin Monumental Cemetery. Many other large plaster models, intended for private burials and urban squares, are now granted on loan to the plaster casts gallery which Bistagno, the birthplace of the sculptor, has dedicated to him.

Also by Monteverde are “Primi giochi” and “Jenner”, two splendid marbles with gentle anecdotal naturalism, purchased by the Dukes Di Galliera and displayed, until 2004, in the Galleria di Palazzo Bianco. Jenner, inspired by the figure of Edward Jenner, a doctor who experimented with the vaccine technique to combat smallpox in 1796, was awarded the gold medal at the 1873 Vienna Universal Exposition. 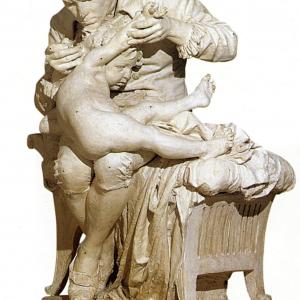 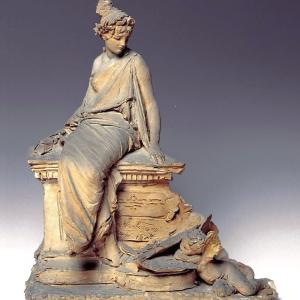