Colours, atmospheres and shapes of Liguria

And, always on the mezzanine, the 20th century sculpture is interesting in the collections of the Galleria with bronzes by Angelo Camillo Maine (Genoa 1892-1969), Entomopsis of 1932 and Stigmatotheuthis of 1936, original subjects drawn from the depths of the sea, the fruit of his experience as a draftsman at the Natural History Museum of Genoa, with vibrant camouflage patinas; and those of Carlo Rivalta (Florence 1887-1941), “sleeping Shepherd”, a figure characterized by an essential and non-rhetorical Martini-style classicism.

Other works are by Guido Galletti, Rodolfo Castagnino, Francesco Falcone, Guido Micheletti, Adolfo Lucarini, Armando Vassallo, Adriana Spallarossa. All protagonists of a fruitful and intense artistic production that distinguished the 20th century in Liguria, with sculptures related to the themes of work, portraits, motherhood, quotidian family life, sometimes executed with a clear classicism as in bronze Madre della Spallarossa (Genoa 1904-Turin 1986) purchased at the II Roman Quadrennial of 1935, with, barely a hint of the regime in the peremptory nature of the pose, in the Ritratto di giovinetta (Portrait of a young girl) by Guido Galletti (London 1893-Genoa 1977), polished ivory stone dedicated to the features of his daughter Paola, and purchased at the 1940 Biennale. Sometimes faced with emphatic accents, such as in Micheletti's Scaricatore(Carrara 1889-Genova 1981) sometimes with a graphic essentiality as in Lucarini (Milan 1890-Pieve Ligure 1959) of which a compact and delicate Maternity from the thirties is presented. 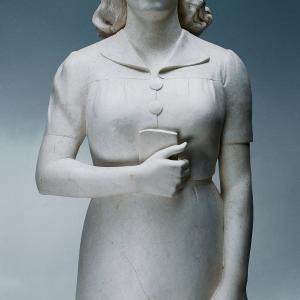 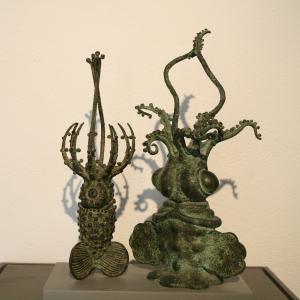