Futurism and futurists in Liguria

As documented by the works exhibited in this room, the linguistic experiments and aesthetic tensions of the futurist movement were widespread in Liguria, especially in the years between the two wars. In fact, Filippo Tommaso Marinetti as early as 1915, during a controversial theatrical performance at the Genoese Politeama had celebrated Genoa as "the futurist city par excellence", also in the rest of the region, to the east and west, important centres of aggregation of the movement were active. Just consider the stylistic innovations in the production of ceramics from the main manufactures in Albisola, or the creative vitality of centres such as Chiavari or Savona, the city where a multifaceted artist like Farfa worked, or finally the avant-garde experience of La Spezia, site of an experimental urban project and an intense publicity campaign of the futurist ideas, with the contribution of Fillia, in the publication of the magazine “La terra dei vivi” (The land of the living).

This diffusion of futurism throughout the region was announced, within the gallery's exhibition itinerary, by the proto-futurist experiences of Sexto Canegallo (Genoa, Sestri P. 1892-1966) and Giuseppe Cominetti (Salasco 1882-Parma 1930), both still characterized from a divisionist composition slyle. These testimonies of embryonic inclination towards futurist poetics are followed by the most mature and conscious Ligurian adhesions to the movement in the 1920s and 1930s. In particular, we must mention the experiences of Tullio Mazzotti, called Tullio d'Albisola (Albisola 1899- 1971), the main interpreter and theorist of the stylistic renewal of the production of Ligurian ceramics, and Alf Gaudenzi who in 1930 established the Artists Group Genovesi Sintesi in Genoa, which Dino Gambetti, Libero Verzetti and Tullio himself joined. The room is completed by a number of works coming from the Wolfsoniana, presenting, in line with the specificity of the collection, the expressive dynamics of the art of propaganda and aero painting, as is evident in the paintings of the Milanese Cesare Andreoni (Milan 1903-1961) and the Venetian Verossì, nickname of Albino Siviero (Verona 1904- Cerro Veronese 1945). 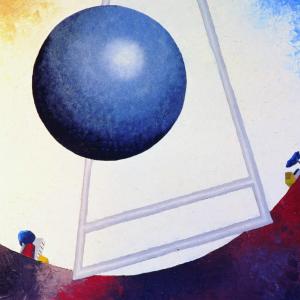 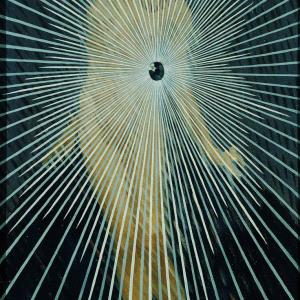 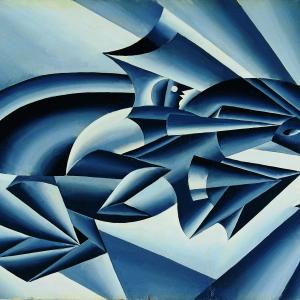