Several skulls are also displayed, showing the similarities in anatomical conformation and dental makeup. The wolf (Canis lupus), positioned next to its skeleton, was found in the forest known as “Luvotti all’Orbexella” in S. Giustina di Sassello (in the province of Savona) in 1871. There was no other confirmed documentation of the species’ presence in Liguria until the discovery of a pair of wolves in Val d’Aveto in January 1990. These are displayed in the Sala Ligure on the first floor.

In Room 4, two large display cases contain representatives of the Felidae family. One of the most notable is the splendid snow leopard specimen (Panthera uncia), a species that lives high in the mountains of central Asia and is considered to be at risk of extinction due to the destruction of its habit and poaching.

The Eurasian lynx (Lynx lynx) was found in western Liguria and dates back to the mid-1800s. The species is currently extinct in the region.

Among the Pinnipeds (Room 5), the Mediterranean monk seal (Monachus monachus) was discovered in 1923 in Camogli, a seaside town not far from Genoa. It represents historic evidence of the presence of the species in the coastal area of the Ligurian sea. Currently, the monk seal, which is the only pinniped found in the Mediterranean, is sighted only occasionally in Sardinia and no longer has a viable population. It is considered to be at risk of extinction and the main reasons for its decline are accidental capture in nets and the progressive disappearance of stretches of isolated coastline, which it needs for reproduction. 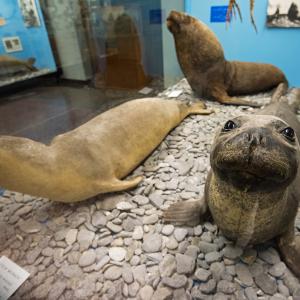