The tutor of his older brothers, botanist Ferdinando Rosellini (1817-1873) from Pisa, influenced him to explore naturalistic disciplines.

Lazarist Armand David (1826-1900), the future explorer of China and Tibet and Doria’s teacher at the Nobile Collegio della Congregazione della Missione di Savona (= Noble College of the Mission Congregation of Savona), further drew him towards the scientific world. In 1853, he became friend with Luigi De Negri (0000-1864), taxidermist of the Museo Zoologico dell’Università di Genova (= Zoological Museum of the University of Genoa), and then joined a small circle of young botanical enthusiasts, who used to gather at Giuseppe De Notaris’s (1805-1877) house.

In 1857, together with his brother Marcello, Giacomo Doria began collecting molluscs in the area around La Spezia, where he also made excursions with geologist Giovanni Capellini (1833-1922). Three years later, in 1861, he founded at his own expense the periodical “Archivio per la Zoologia, l’Anatomia e la Fisiologia” (= Archive for Zoology, Anatomy and Physiology), with the collaboration of Pietro Mansueto Ferrari, Giovanni Canestrini (1835-1900), Filippo De Filippi (1814-1867) and Michele Lessona (1823-1894). The latter two, professors of zoology at the Universities of Turin and Genoa respectively, were almost certainly those who suggested Doria, then twenty-two, joined the Italian Diplomatic Mission to Persia, which sailed from Genoa on 21 April 1862. The three zoologists had different tasks: De Filippi was to collect vertebrates and geological data, while Lessona and Doria gathered arthropods and molluscs.

Doria came back to Genoa in November 1863, with the decoration of the Imperial Order of the Lion and the Sun of Persia conferred by the Shah, as well as a zoological collection of several thousand insects and molluscs, including many new species.

In 1864, he met Florentine botanist Odoardo Beccari (1843-1920) and embarked with him on an exploration on Borneo Island. Before leaving, Doria entrusted his Ligurian and Persian insect collections to a young medical student with strong naturalistic interests, Raffaello Gestro (1845-1936).

Doria and Beccari left Genoa in April 1865 and, after brief stops in Suez, Aden, Ceylon, Pinang and Singapore, on 19 June landed in Kuching, the capital of the Raj of Sarawak, where they immediately found specimens for their collections. For health reasons, Doria returned to Europe in January 1866, while Beccari pursued their zoological research on his own, impeccably. During his stay in Borneo, Doria revealed to Beccari his idea of ​​founding a Natural History Museum in Genoa. 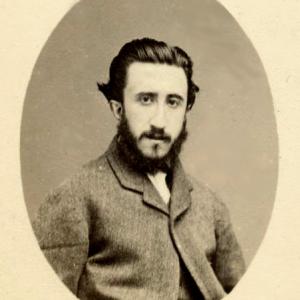