After a general introductory section, the Fish exhibition continues with the systematic display of the different species. Among the most striking pieces are the jaws of a large great white shark (Carcharodon carcharias) which was captured in the Tyrrhenian Sea.

There are several sharks on display, the majority of which from Italian seas, including species that aren’t regularly found in our waters. One example of this is the smooth hammerhead (Sphyrna zygaena), which was also found in the Tyrrhenian Sea.

Not all sharks have the appearance we have come to expert – some have flat bodies and live on the seabed. Rays, which have a very flat body, belong to a group that is closely related to sharks.

Among the bony fish, the stand-out specimens are the kingfish and the bluefin tuna. The kingfish (Lampris regius) is a large, colourful, pelagic, deep-bodied species which is rare to the Ligurian Sea. The kingfish is able to keep its entire body above the ambient  temperature, as can tuna and some sharks. The Atlantic bluefin tuna (Thunnus thynnus) is known as tonno rosso [red tuna] in Italian, with the name referring to the colour of the meat rather than the dark, silvery blue colour of the fish’s skin. The species can grow to over 4.5 metres in length and nearly 700 kg in weight. As a result of intense fishing, it has quickly become a rare species and is currently in serious danger in the Mediterranean.

One of the most striking specimens in the room is the Greasy grouper (Epinephelus tauvina), which was found off the Djibouti coast and weighed over 200 kg.

A model of a coelacanth or latimeria (Latimeria chalumnae), which was created by the museum staff, is a reminder of the history of this unique fish. Belonging to the oldest lineage of bony fish known to man, the coelacanth first appeared around 390 million years ago and was thought to have become extinct in the Cretaceous Period (around 65 million years ago). However, in 1938, a specimen was caught in the Indian Ocean off South Africa. As a result of this, new, in-depth investigations led to the rediscovery of the fish along other stretches of the African coast, including as far as Kenya and the Comoros.

The coelacanth can grow to over 2 metres in length and around 80 kg in weight. 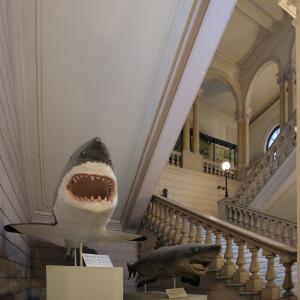 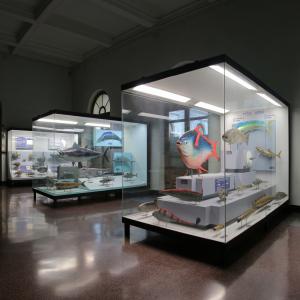