After climbing the marble staircase decorated with African, Eastern and European arms trophies, the tour of the castle guides visitors through the main floor: the Colombian room, the sundial room, the Turkish room, and the cabin. It is a journey through our own essence: the fascination for the exotic, the positivism of the city of Genoa, the anticipation of colonial conquests, and the ethnocentrism that has always permeated the Western world.

Thanks to historical photographs, the original furniture was placed in its original position, so as to recreate the ancient atmosphere of the 19th-century stately home marked by neo-Gothic and Moorish influences. In doing so, the past function of those spaces was restored, with the exception of the Captain’s private apartment, now used as a temporary exhibition area.

Sudan, Eritrea, Abyssinia, North America, Borneo, New Guinea, China, Japan, Persia, Victoria-Nyanza, and Benadir are only some of the titles painted on aluminium of the compositions of bows, shields, arrows, spears, sabers and knives hanging on the walls as colonial and hunting trophies on the first floor and the main staircase, up to the second floor of the castle. On the second floor (the main floor), armours and crossbows, along with European weapons, such as slavonians, halberds, spears and spikes, are arranged in the shape of wheels and parietal decorative compositions, so as to recreate the knightly atmosphere of the castle, following its owner’s intention, using archival photographs. 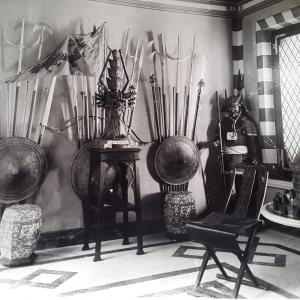