This term defines the vast area between Mexico to the north and Guatemala, Belize, Honduras, Nicaragua and Costa Rica to the south and is characterized by a series of common features of the pre-Columbian civilizations that flourished there, including the use of digging sticks in agricultural work and the cultivation of certain typical crops such as corn, pumpkin, beans, pepper, cocoa, chia (salvia hispanica), & maguey, an agave the fibres of which were used to make a kind of parchment and also to produce pulque an intoxicating drink.

The social and religious sphere was characterized by stratification (the upper classes being composed of soldiers and priests), periodic wars of a ritual character aimed at capturing prisoners to be sacrificed, ritual killing, self-sacrifice and human sacrifice, which served to nourish the gods and ward off the end of the world, as well as an articulated pantheon, a highly developed astronomical science and a complex calendar.

Further common features were the development of the figurative arts and the presence of skilled craftsmen specialized in the working of hard stones, precious metals and quetzal feathers; a ball game linked to a complex solar symbolism, which was held in specially constructed fields built of stone; Temple architecture, consisting of the construction of stepped pyramids topped by a temple intended for worship and ritual sacrifice; a writing system with pictographic and ideographic characters; parchment or maguey fibre books; a vigesimal-based numbering system (to which the Mayans added the crucial concept of zero).

In the southern area, which includes north-eastern Honduras, eastern Nicaragua, central-southern Costa Rica and Panama, as well as part of South America, various cultures arose, not organized into  “states”, these represent a bridge between the pre-Columbian cultures of the south America and those of Mexico.

In Honduras are found polychrome ceramics, sculptures and metatas (a kind of grind stone) in tuff influenced by the Mayan style, while the most characteristic production is that of the sculpted vases in volcanic marble, centred on the Ulúa valley.

In Costa Rica the Nicoya culture and the Chiriquí culture arose; the first characterized by  polychrome ceramics, whose shapes are reminiscent of the Mayan classical era, with representations of characters and animals including feathered snakes and crocodiles; the most characteristic product is that of hard stone club heads and axe-shaped pendants in the shape of divinities, carved, engraved and polished, always in hard stone. The second, which developed in southern Costa Rica and western Panama between AD 850 and 1525 is characterized by small ceramics with very thin walls, in a great variety of shapes, unpainted or with decoration in negative, bi-chrome. Another type of ceramic produced was that of globular vessels and tripod cups with conical feet or with decoration applied with zoomorphic effects; also notable is the goldsmith's production with pendants made using the lost wax technique. 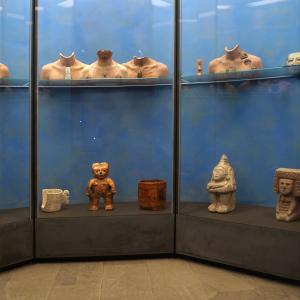