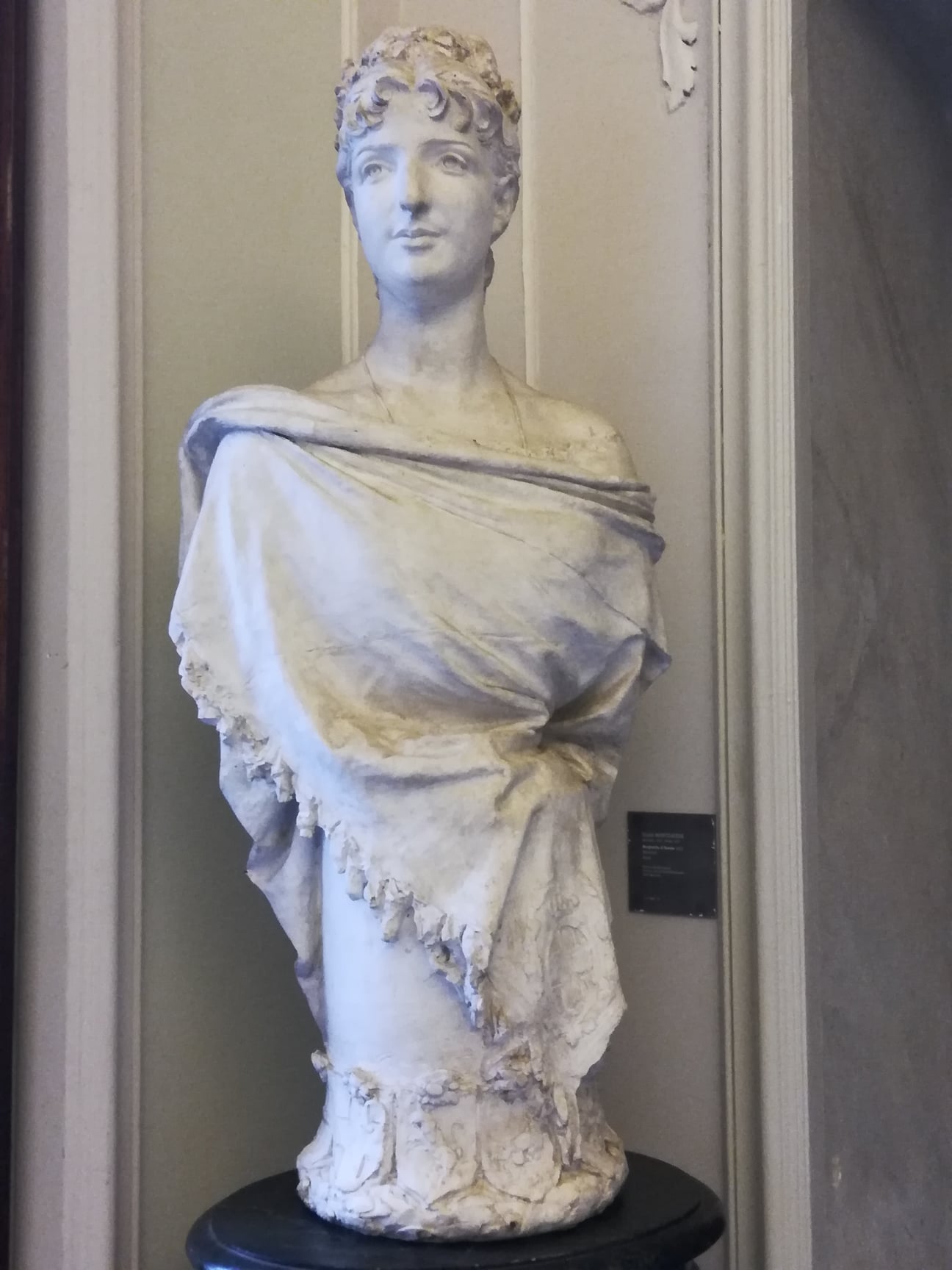 Donated by the artist's daughters, 1919

Daughter of Ferdinando di Savoia, Duke of Genoa, and Elizabeth of Saxony, Margherita Maria Teresa Giovanna (1851-1926), at seventeen married her cousin Umberto, prince of Piedmont who in 1878 became king of Italy following the death of his father Vittorio Emanuele II. The elegant young blonde, who lived in the Turin of the Risorgimento, took on the role of the first Italian queen with brilliant and impeccable ways even during the most difficult events. Enterprising and diplomatic, from 1871, the year of her entry to the Quirinale – open to monthly receptions - she won over the difficult Roman aristocracy. Sensitive to the arts, she supported musicians, writers and artists: Marco Minghetti, a member of the government and public intellectual, Margherita's mentor and Latin teacher since 1880 along with Giosué Carducci were assiduous members of the royal parlour.

The portrait in question, signed on the reverse of the base "Monteverde / Fecit Monza / 1877”, was donated to the city of Genoa in 1919 by the daughters of Monteverde, along with 39 other plaster casts from his Rome atelier. Author of monuments and portraits for public and elite Italian and foreign clients, at the time of this portrait, Monteverde was one of the official artists of the young Italian nation with international recognition for the inspiration and formal quality of his work.

Margherita, who posed for him for fifteen days in the Royal Villa of Monza where the artist was a guest, sketched that "beautiful old man with Leonardo's head." The sculptor emancipates the portrait from sumptuous official iconography, eliminating gems, pearls - linked to the meaning of the name of Margherita and loved by her - and fashionable coiffure. With originality and a tableau vivant taste, perhaps in part prompted by works by Alma Tadema and enlivened by the liquidity of the virtuosic naturalistic modelling, chose the sobriety of an archaeological flavour to reaffirm the exceptional nature of the Savoy in a plaster with a vibrant surface.

In '77, Margherita was not yet sovereign, but hers was one of Italy’s most important cultural salons: "the most intellectual of the Queens", in the words of the same Monteverde. By portraying her, the sculptor transformed her into a Roman figure with a proud bearing, wrapped in a frayed shawl with the Savoy coat of arms: work immediately created in clay and destined for marble at the Quirinale with the addition of a decorated border to the stole, and the elimination of a threadlike necklace in a smoother material. The soft shoulders are partly uncovered to accentuate the neck and face: the physiognomy is realistic, enhanced by the classic hairstyle with a symbolic tiara of leaves and acorns. The bust is grafted onto a cylindrical base (made of gray marble), "too in line with the taste, not always fine, of the time" (Grosso 1937, p.8), just hidden by the diagonal drapery of the shawl and the roughly modelled with coats of arms - a reference to the main Italian cities is clear - surmounted by small sketched daisies.

Already awarded the Order of the Crown of Italy (1873), Monteverde received in 1879 the title of Knight of the Savoy Civil Order, reserved for writers and artists; in 1885, the year of the portrait of the king for the Senate, he received the Order of SS. Maurizio and Lazzaro. The seal of an esteem that the royals showed him by visiting his studio and being accompanied by him to visit intellectual cultural events and artists.