The Penitent Magdalene by Antonio Canova

The Penitent Magdalene, one of the most celebrated sculptures by Antonio Canova (Possagno 177 - Venice 1822), is the culmination of a long process of invention and study begun in early 1790 and, in the creation stage, lasting from 1794 to the end of 1796. Commissioned by Bassano friend and functionary Tiberio Roberti (1749-1817), the sculpture was preceded by a drawing from the Eb Bassano sketchbook and two bozzetti, one in terra cruda, now in the Venice Civic Museums collections, and one in terracotta, still in the Canova collection of the Bassano del Grappa Museums, and a plaster model, identified as a sculpture in the Civic Museums of Padua. In April 1794, the sculpture was in progress and was finished, if not before the Ascension in 1796, then shortly afterwards.

To the rear, the drape enveloping the figure’s hips bears the date 1796, which a previous older rubbing had mistakenly changed to 1790.

Canova's long experience in the art of bas-relief during those years had led him to reach “unexpected achievements” (Mazzocca 2009) in “the expression, the contours, the draping”, that is, in expressing the form of the body while incorporating emotion. The natural rendering of the marble with highly sensual effects in the figure and in the face of the young sinner, on the point of exhaustion, revealing the contrition and suffering of her long penitential fast, are rendered with an extremely refined technique, “Execution magique”, which achieves the result of a “soufflé créateur” (Quatremére de Quincy 1834).

In 1797, financial difficulties linked to the Napoleonic battles in the Veneto campaigns forced Roberti to relinquish its purchase. Venetian critic Francesco Milizia secured Canova a new buyer in Giovanni Priuli (1763-1801), a Venetian national auditor at the Tribunal of the Roman Rota, who became its notional owner before June 1797, without, however, gaining possession. During the Directory years the sculpture was purchased for 1000 gold pieces (twice the original estimate!) by Jean-François Julliot, a merchant and a man whose great wealth was obtained through paramilitary supply during the Italian and Egyptian Napoleonic campaigns. On the 28 March 1808, lawyer Giovanni Battista Sommariva (1757-1826), a leading member of the Milan triumvirate which had held the second Cisalpine Republic between 1800 and 1802, announced to Canova the purchase, probably occurring in Milan at the end of 1806, of the Penitent Magdalene and the Apollino. In his Paris residence, the “affetti” were exalted through dramatic, what today we would call accent, lighting, already fully romantic, even symbolic, in a boudoir padded in mouse-grey silk with a mirror reflecting the hidden rear to visitors. Exhibited at the Salon in October of the same year, the sculpture was met with universal acclaim.

Subsequently transferred by Sommariva to Milan, it was sold to the Marquis Aguado, returning once more to Paris. Shortly after the latter's death, it was purchased for 59,000 francs by Raffaele de Ferrari, Duke of Galliera, and placed in his Paris residence, the Hôtel de Matignon. It then came to Genoa in 1889 by the bequest of his widow, Maria Brignole-Sale de Ferrari, Duchess of Galleria. 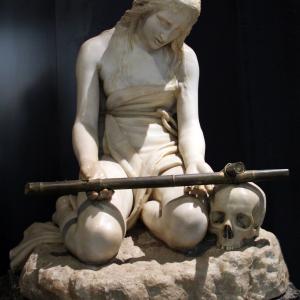