The works of the “Genoese school” dating from the early sixteenth century to the nineteenth century constitutes the heart of the collection of the Drawings and Prints cabinet of Palazzo Rosso: it consists of over 6000 sheets including designs for paintings, frescoes and furnishings, portraits, landscape drawings, academic studies, studies from life, drawings for monuments and for the theatre. Among the many possible themes to follow a selection of designs from the Genoese school for interiors, frescoes and furnishings are outlined below, they document the taste of the leading local aristocracy in the Baroque period. The drawings, finely executed and of the highest formal quality, provide a fascinating example of what was, in the century of "grand decoration" and rich Genoese paintings, the extraordinary efforts of the artists to furnish and enrich the magnificent residences of the nobility of “La Superba”: inventions for walls, stuccos, furnishings, frescoed vaults, alcoves and representative rooms.

We start with a work by Ottavio Semino (1530-1604) with Jupiter and Danae, a “profane” subject probably intended as a fresco in one of the private spaces of an aristocratic residence; we continue with a large drawing by Lazzaro Tavarone (1556-1641) - a pupil of Luca Cambiaso and one of the most important figures the local artistic circle of the early seventeenth century - preparation for a complex series of lunettes, sails and hangings of the vault of a hall; then on to the astonishing inventions for picture collections by Domenico Piola (1627-1703) and Gregorio De Ferrari (1647-1726). The prolific and multifaceted activity of Domenico Piola, was applied to the most diverse fields, from the invention of elaborate mythological scenes to be painted in fresco, to luxury furniture and furnishings - see here the magnificent design of Hall decoration featuring fake ruins for the frescoes produced by the artist in Villa Balbi allo Zerbino; and Diana visiting Atteone, a subject later frescoed by his son Paolo Gerolamo on the vault of the Loggia delle Rovine in Palazzo Rosso. The exuberant imagination of the second, Gregorio De Ferrari, Piola's son-in-law, is instead exemplified here by some designs for walls to form a gallery, with rich stuccoes and fountains, shells and cartouche in a what had become a proto-Rococo style.

The large fresco decoration and interior design of the 18th century is exemplified by works  by illustrious figures from the city's historic workshops: the aforementioned Paolo Gerolamo Piola (1666 - 1724), Domenico Parodi (1668-1740), son of the sculptor Filippo, and Lorenzo De Ferrari (1680-1744), Gregorio's heir. Not only frescoes, but also designs for interior furnishings, statues and fountains for the gardens of the residences. Of particular note are the refined designs by Lorenzo De Ferrari for the Golden Gallery of Palazzo Carrega Cataldi: the study for the scene with Venus intercedes with Jupiter for her son Aeneas, on white paper, drawn in red and black pencil, and the two large detailed designs for the figures of The Three Graces and Two female divinities on cerulean paper, outlined in black pencil and the forms and shading in white chalk.

The collaboration with “quadrature” painters, specialists in painted architecture, led Genoese artists to also depict imaginative ornaments and trompe l'oeil, which were then entrusted to the execution of another hand; however the quadraturists active in Genoa, could also work autonomously to develop articulated perspective solutions with their own ornaments and backgrounds: this is the case of the drawings by Francesco Maria Costa (1672-1740), who also designed furnishing elements such as elaborate chandeliers with multiple arms , and also with Andrea Leoncini (1701-1760). 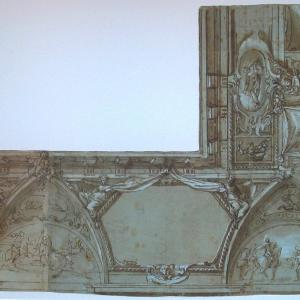 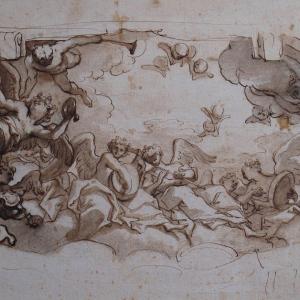 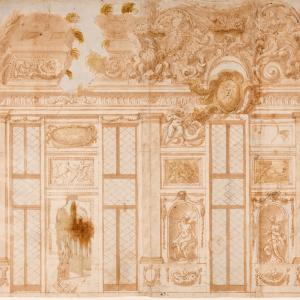 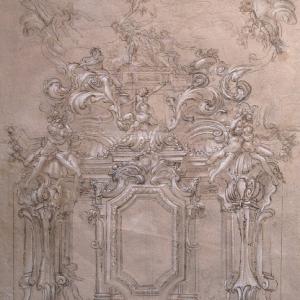 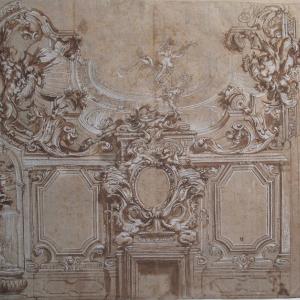 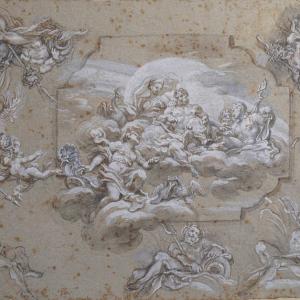 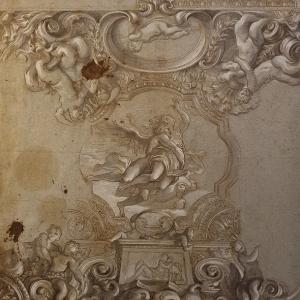