The portraits of Ottavio Leoni

The collection of portraits on cerulean paper by Ottavio Leoni (Rome 1578-1630) preserved in the Genoese civic collections amounts to a total of some 50 sheets, they are of great importance both for their quality and chronological extent: in fact, the drawings demonstrate his exceptional skill and their production covers the whole period of his career as a portraitist, from the end of the sixteenth century and including works produced over the first thirty years of the seventeenth century.

The range of characters that the portraits depict is also very rich: illustrating a vivid cross-section of early seventeenth century Roman society. Historical-artistic research combined with the writings present on some of the sheets (autographs, others notes by collectors, sometimes partially faded and cut) have, in some cases, allowed us to put a name to the figures 'photographed' by Leoni: in the Genoese collection they include, examples of portraits of the nobility, such as Vittoria Caetani dell’Aquila d’Aragona (inv. D2427), the Marquis Paris Pinelli (inv. D2414) and Alexander VII Sforza, Duke of Segni (inv. D2422); portraits of princes and princesses, such as Maria Felice Peretti (inv. 2445) or the Prince of Castiglione (inv. D2439); of cardinals, such as Monsignor Gerolamo Grimaldi, cardinal of Trinità dei Monti (inv. D2434); but also of figures from quite different social backgrounds, who for various reasons had gained public note in the Rome of the day, such as the composer and organist Paolo Quagliati (inv. D2410).

There are also faces that have remained 'anonymous', both of aristocrats and commoners: for example, the sheets with Portraits of a man and a woman (inv. D2412) or those of a monk and a child (inv. D2413), these were depicted by the artist individually and then paired within a single blue paper passepartout bearing an elegant golden profile by a collector sometime between the eighteenth and nineteenth centuries.

The sheets in Genoa belong to various moments of Ottavio Leoni's career: there are early portraits, datable to the end of the sixteenth century and characterized by more marked and continuous, more insistent outline in black 'pencil' (for example the Portrait of a young man inv. D2420); others in which the black pencil is flanked by white chalk, as in the case of the famous Portrait of Vincenzo Gonzaga, Duke of Mantua (inv. D2440); while others, datable to the last phase of the artist's career, between the second and third decades of the seventeenth century, in which there is a more nuanced use of red and black pencils and chalk, with more delicate passages and soft coloured shading: to this group belong, for example, the previously mentioned Portrait of Lorenzo Gioeni Principe di Castiglione (inv. D2439) and the two Portraits (of a man and a woman), mounted in a single passepartout (inv. 2412), in which the use of red pencil is strongly marked.

Some of the works from the Drawings and Prints Cabinet of Palazzo Rosso - which originate from a bequest by Marcello Durazzo to the civic library in 1848 - bear the inscription "Ulisse Aldrovandi 1799", an interesting indication of a previous provenance from the collection of Count Ulisse Aldrovandi, art patron, collector and amateur painter, who was a scion of the Aldrovandi Marescotti family of Bologna. Aldrovandi, who together with his brother Carlo Filippo (1763-1823) was a student of the Fine Arts and was in contact with the artists and writers of his native city and had set up a sort of Academy in his home, where he had gathered paintings - particularly Nordic - but also drawings, prints and art books. 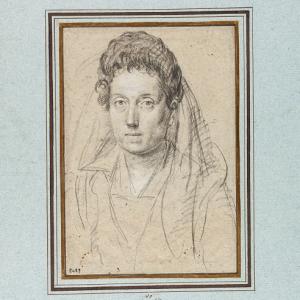