Palazzo Rosso was built between 1671 and 1677. It was designed by architect Pietro Antonio Corradi, while the construction was overseen by Matteo Lagomaggiore. The building has a U-shaped footprint, inspired by the plan types used by Bartolomeo Bianco: the two wings joined by loggias, enclosing the inner square courtyard. Both main floors, the piani nobili, have the typical layout featuring a loggia and the big hall in an axial position and a row of rooms on each side. The eldest son, Ridolfo Maria, occupied the second floor, while the first was given to Gio. Francesco. However, when Ridolfo died without male heirs in 1683, the younger brother became sole owner and moved up to the second floor. He bought the portraits of his parents from his niece Paola, the wife of Carlo Spinola, and commissioned fresco decorations for the second-floor rooms, also making allowances for their extension beyond the east wing, which was completed after his death, to all the other rooms on the mezzanine. Domenico Piola (1627-1703), Gregorio De Ferrari (1647-1726), and, later, Paolo Gerolamo Piola (1666-1724) took part in the first decoration phase between 1679 and 1694 with the help of perspective quadratura painters and stucco experts. By the end of this initial phase, the decorations had been completed in the Salone, with perspective decorations by the bolognese Gio. Enrico and Antonio Haffner and the magnificent ceiling fresco by Gregorio De Ferrari, which was unfortunately destroyed during air raids in the Great War; four rooms in the east wing, each with subjects inspired by a season of the year; and finally the loggia, where the arcades were filled in, thus transforming it into a small picture gallery, where Codazzi painted his false ruins and Paolo Gerolamo Piola the scenes from the myth of Diana and Endymion.

The spring of 1691 marked the beginning of the year-long decoration works in the four rooms of the west wing: the Sala della Vita dell’uomo and the Sala delle Arti Liberali were frescoed by Gio. Andrea Carlone (1639-1697) with the help of Antonio Haffner for the perspective scenes on the walls of the latter, opening onto the Paesaggi by Carlo Antonio Tavella (1668-1738) ; the Alcove room frescoed by both Gio. Andrea Carlone and his brother Nicolò, now also with a later decoration; the last room, which is entirely the work of Bartolomeo Guidobono (1654-1709), whose Fucina di Vulcano on the ceiling was damaged and replaced in 1736 by the Domenico Parodi’s Gioventù in cimento.

The renovation work and completion of the decorations continued through to the mid-19th century, as the Brignole-Sale collection grew in size and quality. A few years after the death of Gio. Francesco, the collection was further enriched by the inheritance of his father-in-law, Giuseppe Maria Durazzo.

The passion for art displayed by Gio. Francesco I was kept alive by his grandson, Gio. Francesco II (1695-1760), who commissioned architect Francesco Cantone to decorate the façade of the Palazzo Rosso and the adjacent Palazzetto. Both got their current look back in 1746, with the characteristic lion heads on the lintels of the windows of the two main floors, as a reference to the heraldic weapon of the Brignole: a rampant lion under a tree of plums (in Genoese dialect, brignole).

The diplomatic mission to Paris between 1737 and 1739 gave Gio. Francesco II the opportunity to appreciate the then-prevailing Regency style. He thus commissioned his and his wife’s portrait to the King’s painter, Rigaud, and ordered new, in-fashion furnishings for the stately home.

The renovation programme also included the decorations of the first room of the annexe of the building, the dipendenze, by Gregorio De Ferrari’s son Lorenzo De Ferrari. This policy of artistic greatness was crowned by Gio. Francesco II’s election as doge of the Republic of Genoa in 1746.

Further works were launched around 1783 for the construction of a new apartment on the mezzarie superiori, located on top of the second floor, after Anton Giulio II (1764-1802) married Anna Pieri, a lively and well-educated member of the aristocracy in Siena. Unfortunately, these rooms, whose decorations were vaguely inspired by the themes of the Enlightenment with decorative motifs between Louis XVI and proto-neoclassical style, were largely destroyed during the bombings of World War II.

The floors were renovated and paved with fine polychrome marble even before the mid-19th century when the building belonged to Antonio Brignole-Sale. When he died, his eldest daughter, Maria, better known in Genoa as the Duchess of Galliera, co-inherited Palazzo Rosso and finally obtained full usufruct of the building upon her sister’s death. As her son Filippo, whom she had had with Marquis Raffaele De Ferrari, did not show any interest in the property and traditions of his lineage, in January 1874 she decided to donate Palazzo Rosso to her city, aiming at both “enriching [its] beauty and income” and, at the same time, transforming the building into a veritable monument to the Brignole-Sale family.

The Salon of Virtù Patrie 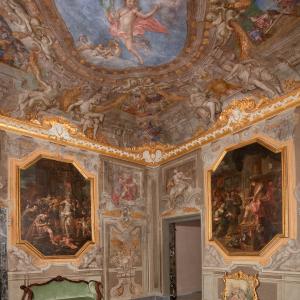 The Salon of Virtù Patrie 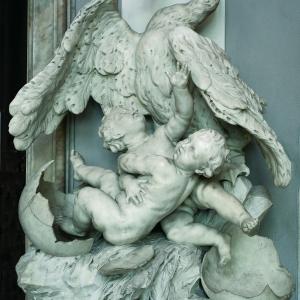 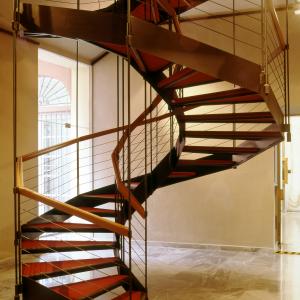 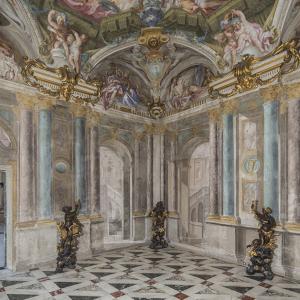 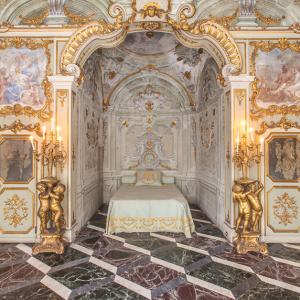 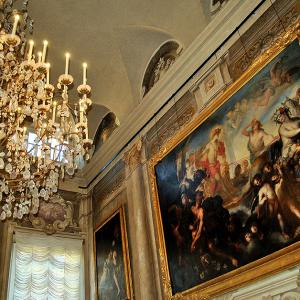 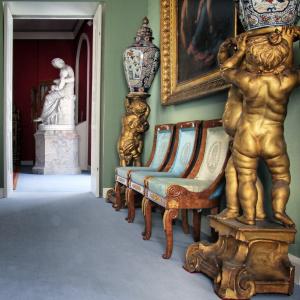 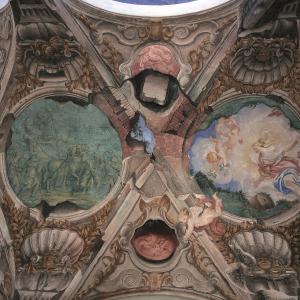 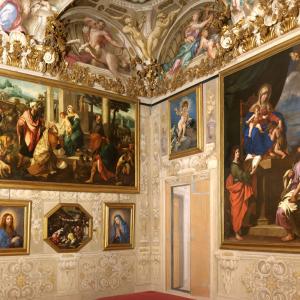