The 19th-century appartments of the Brignole-Sale

The last Brignole-Sale, that is Antonio (1786-1863) with his wife Artemisia Negrone and their daughters Maria and Luisa, lived in the rooms on the west of the top floor of Palazzo Rosso. Of their time, only a few refined furnishings survive: those for the living room and library, commissioned by Antonio Brignole-Sale from the English cabinetmaker Henry Thomas Peters, who was active in Genoa in the first half of the nineteenth century, and the French ones, coming from the Parisian residence of Maria (1811-1888), who with her husband, Raffaele de Ferrari, resided from 1854 until her death in one of the most luxurious buildings in the French capital, the Hôtel de Matignon.

The precious furniture of the nineteenth-century library - bookcases, centre desk, chairs and sofas - were made in the 1840s by the English cabinetmaker Henry Thomas Peters, supplier to the King of Sardinia, at the request of Antonio Brignole-Sale (1786 -1863) – whose marble bust is in this room and in portrait in the adjoining one - who commissioned these furnishings to house the family library, originally located in some rooms in the guest areas of the second floor (piano nobile) of Palazzo Rosso. The current layout of this room is evocative of those rooms.

The family portraits of the last Brignole-Sale are gathered in the adjacent Donors' room, all involved, in various roles, in the donation of Palazzo Rosso and its precious collection to the city of Genoa: a young Maria, the future Duchess Di Galliera, portrayed with Genoa’s lighthouse (“la Lanterna”) in the background;

next to her, her parents Antonio Brignole-Sale and Artemisia Negrone; while on the opposite wall, once again Antonio Brignole in his role as president of the hospital of Pammatone, with by his side his daughter Luisa and nephew Filippo, the last heir of the family.

The name of the Sala dei Donatori refers to the fact that, on 12 January 1874 Maria Brignole-Sale and a representative of her son Filippo de Ferrari signed the deed of donation to the City of Genoa of the Palazzo Rosso "with the asssociated Gallery of Paintings and Library”, brought to fruition an idea of public access to those collections started by Antonio and, in fact, imposed in the will of Luisa (1822-1868), sister of the future Duchess Di Galliera.

The Parisian residence of the Dukes of Galliera: Hôtel de Matignon.

After entrusting the city with their ancestral home and the works of art it contained, Maria, in her final will, also wanted to donate some furniture, paintings and personal objects from her French residence, the Hôtel de Matignon, hence the original furnishings, a sitting room and a bedroom which are reconstructed in these rooms: the atmosphere of two rooms of their Parisian home, current residence of the Prime Minister of France, is thus recreated with a similar layout, with various precious furnishings that the Duchess and her husband had bought or had made for that house and some of the paintings that adorned it’s walls. The living room furniture was created by some of the most famous artists of the time, suppliers of the court and of Parisian high society.

In the bedroom, a suite of furnishings stands out - two dressers with risers, a psyche (that is a large adjustable mirror), armchairs and chairs - made around 1830 by a great Swiss cabinet maker Jean-Jacques Werner (1791-1849) who was then active and highly admired in Paris: According to the taste of the time, the furniture is veneered in ash burl and decorated with gilded bronzes of exquisite workmanship. Looking carefully at the two chests of drawers, you can see that the locks of the various doors are not visible, hidden by small sliding bronze elements in order to make the furniture aesthetically perfect. 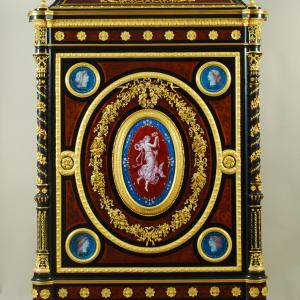 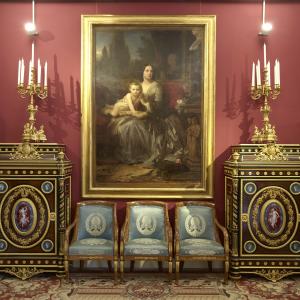 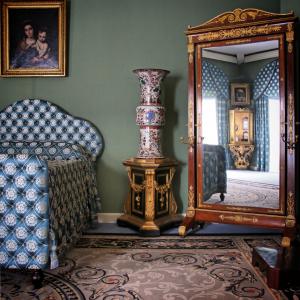 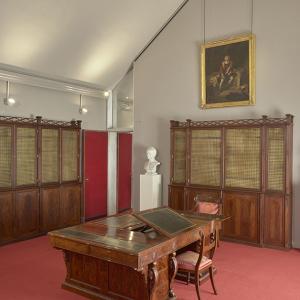 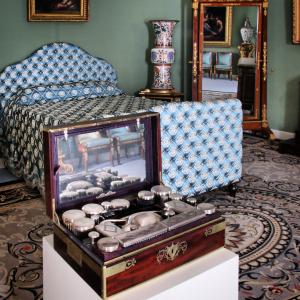 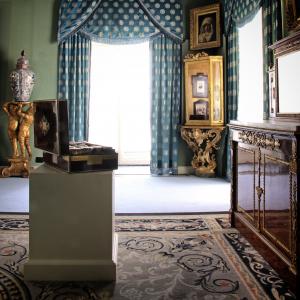