The palace was built starting in 1565 by Domenico and Giovanni Ponsello for Niccolò Grimaldi (1524-1593), nicknamed “Monarch” for the number of noble titles he could boast of, and to which he added the enormous debts that Philip II owed him, to whom he was the principal banker. It is the most majestic building in the street, the only one built on three lots of land, with two large gardens framing the central body and represents the culmination of the residential splendour of the Genoese aristocracy.

It is not known how much was remained to complete the works, but certainly when, in 1575, Philip II of Spain, Grimaldi's main debtor, declared the suspension of payments, for the Genoese it was the ruin. He moved to Madrid to try to recover his wealth, suspended all construction and, above all, decorative activities, so the building lack of frescoes is due to this episode. In 1593, the palace came into the hands of Gio. Andrea Doria, prince of Melfi, who wanted a prestigious residence such as this to be used for the younger branch of his descent, that of Charles I, Duke of Tursi (1576-1649), whose noble title still gives it’s name to the palace. The large loggias overlooking the street were added at this stage.

After more than two centuries, on 13 January 1820 Casa Savoia acquired the palace from Maria Giovanna Doria, 5th Duchess of Tursi: thus began the "Piedmontese phase" of the history of the residence, during which time, in addition to completing the back of the building and constructing the clock tower it received  the interior decoration still largely characterizes it. Subsequently given over for some years for use by the Jesuits, the palace on June 15, 1850 became the property and seat of the Municipality of Genoa.

The facade is characterized by the alternation of different coloured materials: pink stone from Finale, gray-black slate and the precious white Carrara marble. It consists of two overlapping orders: the raised floor above the large plinth alternates windows with an original design with jutting rustic columns, replaced on the upper floor by Doric pillars. Grimacing animal masks surmount the windows of both floors, contributing to the moulded rendering of the facade.

The majestic marble portal is crowned with the coat of arms of the city of Genoa. Particularly innovative is the unprecedented and ingenious architectural solution which, with the succession of internal spaces - atrium, staircase, rectangular courtyard raised above the portico and double ramp staircase - creates a wonderful play of light and perspectives.

After the work of 2003-2004, the entire main floor of the building was opened to the public, integrated into the Museums of Strada Nuova: in addition to the five rooms intended to complete the path of the Pinacoteca di Palazzo Bianco with 18th century paintings - the famous “Entertainment in an Albaro garden” by Alessandro Magnasco - and a “Magdalene” by Antonio Canova, you can admire the monumental spaces, and a series of rooms that host various parts of the city’s collections: weights and measures from the ancient Republic of Genoa, collections of coins and medals, ceramics, tapestries, the violin of Nicolò Paganini (1782-1840) and other memorabilia of the famous Genoese violinist and composer, who in his will, left to his hometown "to be perpetually preserved" his favourite instrument, nicknamed because of the fullness of it’s sound “il canone”. 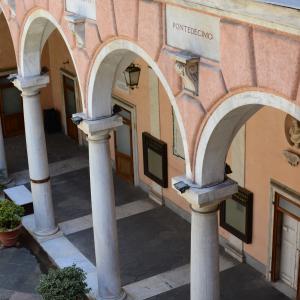