Strada Nuova, dedicated to Giuseppe Garibaldi in 1882, has an official date of birth: March 17, 1550, when, with almost prophetic awareness, the rulers "of the excellent Republic of Genoa"  stated in the associated decree that the then, semi-peripheral area, at feet of the steep slope of Castelletto, was to be the location to erect "many beautiful buildings, which will bring not only utility but also beauty to the city".

Built largely in the thirty years from 1558 to 1588, the buildings of Strada Nuova were an met immediate admiration. Giorgio Vasari, when only ten years had passed since the start of the first construction sites and when the western part of the street still had huts and vegetable gardens or gardens, reported that "... many affirm that in no other city in Italy can you find a road more magnificent and larger than this , nor one filled with such very rich buildings ... ". The historian himself attributed the authorship to the Perugian architect Galeazzo Alessi (1512-1572), disciple of Antonio da Sangallo, who, in fact, limited himself to designing those new private buildings -  villa Giustiniani in Albaro and villa Grimaldi Cebà "in Bisagno ”- which constituted models for the buildings of Strada Nuova.

Two models displayed in the teaching room of Palazzo Rosso, relating to the two sides of the street, illustrate its appearance at the beginning of the seventeenth century. Due to their exceptional quality, Pietro Paolo Rubens (1577-1640) chose the dwellings of Strada Nuova for the drawings which he made “in situ” to include in his famous book dedicated to the Palaces of Genoa, published in Antwerp in 1622, through which he gave to the residences of “la Superba” an imperishable European fame.

Various subsequent events led to some changes in the facades and structures of the buildings, and it is only with the construction first of Palazzo Brignole-Sale, later nicknamed Palazzo Rosso, and subsequently the radical transformation, again by the Brignole-Sale, of Luca Grimaldi's palace, today's Palazzo Bianco that from the end of the seventeenth century the current aspect of the road can be considered completed.

Finally, the western opening of Piazza della Meridiana and via Cairoli dates to the end of the eighteenth century.

Since 2006 Genoa has been included in the UNESCO World Heritage List precisely for this complex of "new streets" (the sixteenth-century via Garibaldi, the seventeenth-century via Balbi and the eighteenth-century Strada Nuovissima, now via Cairoli) as well as for its magnificent Renaissance and Baroque palaces : a unique set of aristocratic residences, sometimes carefully designed as part of a real urban plan and which have maintained their connotation over the centuries. This system of dwellings forms part of the so called "dei Palazzi dei Rolli" because in the oligarchic Republic of Genoa they were the private aristocratic residences that were identified as the most suitable to host distinguished visitors to the city, and for this reason these residences were included in special lists, "the Rolli", from which they were selected by lot. The most prestigious buildings, registered in the first category of the Rolli, are located precisely along the axis of the "new roads", between the sixteenth-century Via Garibaldi and the seventeenth-century Via Balbi, as well as in Via Lomellini and in the 'curial' area of the Doria in San Matteo. 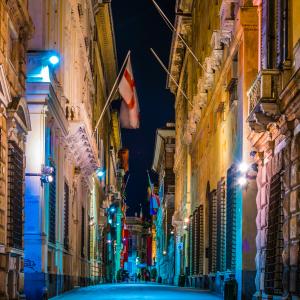