The collection of drawing of the Museums of Strada Nuova counts nearly 10,000 pieces and is regarded as one of the most important graphic collections at the national level. Specific groups of sheets are particularly significant thanks to their size and quality, thus making the collection of fundamental relevance in the figurative tradition of Genoa and Liguria (16th-20th centuries), Emilia (16th-18th centuries), as well as of specific artists, such as Ottavio Leoni and Bartolomeo Pinelli. Besides, the Prints and Drawings cabinet also includes surprising pieces of figurative art from other Italian and European schools.

The first part of the collection is the bequest of Marcello Durazzo (1790-1848) – who died without a male heir after devoting his entire life to culture – consisting of 1,656 sheets delivered to the Civic Library in October 1849. In 1863, Durazzo’s descendants donated 65 additional drawings which had been found among his documents. The Durazzo collection, which bears no identification stamp, mainly contains drawings by Genoese and Emilian artists and, to a lesser extent, by other Italian schools, as well as a limited number of works by foreign masters. These Emilian drawings are among the most precious items of the civic drawing fonds. As reported by Rebuffo in his biography of 1860, Durazzo lived in Bologna in 1810, where he purchased, a piece at a time, a wealth of drawings through painter Francesco Giusti, a part of the collection of engraver Clemente Nicoli, and “an additional collection from a certain Mr. Bracchi for 2,600 scudi”. Giusti had purchased a substantial number of drawings by Guercino and other artists from the last heirs of Benedetto and Cesare Gennari, who were Guercino’s nephews and disciples. At least one of the drawings by Guercino now belongs to the civic fonds as part of the Durazzo collection, together with a drawing for Amico Aspertini’s tomb, which was attributed to Guercino by the 17th-century Bolognese historian Carlo Cesare Malvasia.

Over 60 sheets from Nicoli’s collection came to the Palazzo Rosso, including works by Annibale Carracci, Guido Reni, Domenichino and Guercino again. Finally, some of Ottavio Leoni’s portraits bear a note of original property of a certain Aldrovandi, Bologna collector of the late-18th century.

Further additions were made forty years later, after the complex history of the inheritance of the sculptor Santo Varni (1807-1885): while he had provided for the legacy of his entire art collection to the Municipality of Genoa (his collection of drawings amounted to over 4,000 pieces), his will was challenged by his heirs. In November 1887 the auction was suspended, during which a good chunk of the collection had gone lost, and in 1888 the Municipality only managed to acquire about a hundred drawings. However, over 650 drawings were added to the Civic collection through the purchase from sculptor Norberto Montecucco in 1899, the donation from Giorgio Passano in 1905 and the legacy by Barbano’s widow and Varni’s grandson, Mary Ighina, in 1926, further increasing the number of sheets of Genoese tradition, particularly by Domenico Piola and his circle.  The Passano collection also includes 440 drawings by Bartolomeo Pinelli, part of which illustrate Dante’s Divina Commedia and Tasso’s Gerusalemme Liberata, and at least 200 drawings by 19th-century Genoese and Italian artists, such as Santo Varni, painters Santo Bertelli, Giuseppe Bezzuoli, Giuseppe Frascheri, Francesco Gandolfi, Felice Giani, Giuseppe Isola, Tommaso Minardi, and architect and stage designer Michele Canzio. The collection of Canzio’s drawings represented a remarkable addition through the legacy of 1909 by John Novaro, grandson of Canzio: 467 sheets, mostly sketches of stage designs for operas and ballets represented in Genoa between 1828 and 1857. With a similar theme, just under 100 watercolour sketches of stage costumes for Verdi operas were also acquired in 1936 from Silvio Ricagni.

The most significant acquisitions at the turn of the century were some of the most relevant of the cultural policy implemented in those years by the Municipality of Genoa, which already in 1893 had opened the Civic collection of drawings in the then opened museum of the Palazzo Bianco, exhibiting part of the Durazzo collection, as well as the drawings obtained from Varni’s heirs. Further additions include the interesting collections of antiquarian Giovan Battista Villa and sold in 1904 by his son Umberto, of André Giordan, purchased in 1908, and the drawings of painter Ernesto Rayper, sold in 1909 by his heirs. It should be noted that the Villa fonds, amounting to around 300 drawings, predominantly include designs for prospective architectural projects and decorative arts, from both Genoa and Emilia, further diversifying the Civic drawing collection. In 1910, the “Specialised Secretary” of the Office of Fine Arts of the City of Genoa since 1905, Orlando Grosso, published with Arturo Pettorelli a booklet of 100 of these drawings, which still represents a useful insight into the collection.

Further additions date back to the period between the two wars. Some of the most significant in terms of provenance or consistency include: in 1924, the purchase of 368 drawings by Michele Canzio and other Genoese set designers from Mario Mocafico; in 1937, the purchase of 75 drawings by Marcantonio Franceschini and 75 by Francesco Baratta belonging to Ferdinando Brocchi’s collection from Enrico Pasteur; and, in 1940, the purchase of at least 60 drawings by the 19th-century Genoese architect Carlo Barabino, part of whose graphic production is housed in the Topographical Collection annexed to the Museum of Sant’Agostino.

An addition of international provenance finally came in 1942 through the donation by Anselmo Foroni Lo Faro, consisting of 400 drawings from the collections of Carlo Argentieri and Pier Giulio Breschi, who died in Rome in 1937: besides the variety of artists – from Correggio to Gandolfi, from Potter to Houbraken, from Callot to Wicar –, the main trait of this collection is the prestigious provenance of these drawings made by, among others, Sir Joshua Reynolds (1723-1792) and Gaetano Morelli (1819-1891).

Since 1961 the Civic collection was moved from the Palazzo Bianco to the mezzanine between the first and second floor of the Palazzo Rosso, displayed in specially designed drawers by Franco Albini, also displaying the engravings and prints, mostly of Dutch origin, of the Museums of Strada Nuova. 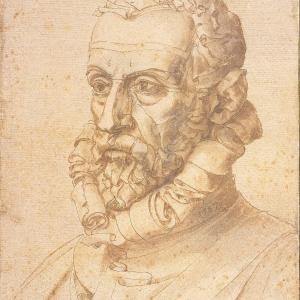 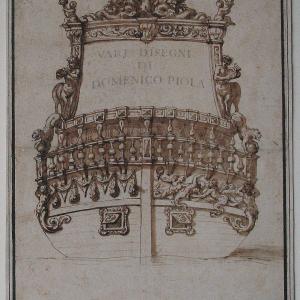 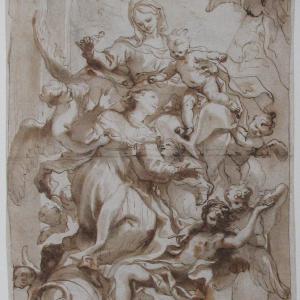 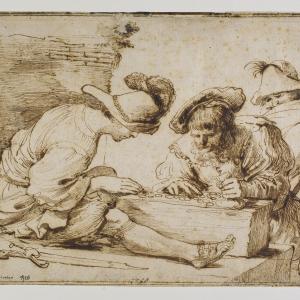