Between the sixteenth and seventeenth centuries, a major new current emerged in the language of painting derived from “Caravaggesque” works: this new and decisive search for naturalism in pictorial representation, accompanied by a dramatic use of light, is characteristic tof he entire career of Michelangelo Merisi, more commonly known as Caravaggio (1571-1610) and his followers, both Italian and foreign.

A famous Ecce Homo exhibited at Palazzo Bianco, at various times attributed to the hand of Caravaggio, the fascinating history of the controversial attribution, far from diminishing, has rather increased its fame. Originally registered in the inventory of Palazzo Bianco in 1921 as a 'copy by Lionello Spada”, without any indication of its origin was heavily damaged during the Second World War and the painting remained largely ignored until the early 1950s when, recognized as the original prototype of the canvas of the same subject preserved in the National Gallery of Messina, it was attributed by the authoritative art historian Roberto Longhi to Merisi. Various factors have weighed on the evaluation of the painting over time: first of all the state of conservation found in the historical photos and the significant conservation work which it was subjected to after the war, but also the lack of information relating to its history and the time of its entry into the museum's collection. Only recently, in fact, has an archive document been found that allows one to hypothesize its purchase in 1908 from the private collection of Giovanni Cabella. Traditionally identified with the painting of the same subject painted by Caravaggio for the Roman aristocrat Massimo Massimi, of which we have news from a signed contract between the painter and the client dated 1605, the painting could also be one of the subjects commissioned from the Milanese painter in 1609 by Niccolò di Giacomo from Messina: four Stories of the passion, among which a Christ carrying the cross was certainly completed, while there is no certainty about the execution and iconography of the other subjects. Suggestive, but not supported by documentary evidence, is the hypothesis that the painting was undertaken in Genoa in the summer of 1605, when Caravaggio was guest of Prince Giovanni Andrea Doria, or even the suggestion that Marcantonio Doria – who commissioned the last known work by the artist, the Martyrdom of saint ursula which arrived in Genoa by sea – was also the first owner of the Ecce Homo. To date, in any case, the client and the date of production of the work remain without solid certainties.

On the same wall, the extraordinary formal quality of Davide with the head of Goliath by the Frenchman Simon Vouet (1590-1649), active in Rome in the circle of the followers of Caravaggio, again brings us back to Genoa, where it is likely that it was painted in the summer of 1621 while the artist was a guest in the villa of Sampierdarena of the aforementioned Marcantonio Doria and his brother Gio. Carlo, who was the probable commissioner of the painting was refined and enlightened collector. In his collection there were other masterpieces executed by Vouet during his stay in Genoa: the portrait of the same Gio. Carlo Doria and a Judith with the head of Holofernes, today in private collection, which was a counterpart to this David and Goliath. The accuracy of the pictorial layout masterfully modulates the complexion of the hero's body expressing together truth, might and ideal beauty: David, captured by the painter in a timeless moment, emerges from the darkness holding on one side a sword, and on the other the huge head of the defeated giant.

In the same room, along with other works from the Caravaggesque school (including the colourful Nordic realism of Salomè with the head of the Baptist by Matthias Stomer (c. 1600 - post 1650)) are three paintings by Giulio Cesare Procaccini (1574- 1625), Giovan Battista Crespi known as Cerano (1573-1623) and Pier Francesco Mazzucchelli (il Morazzone), the three greatest exponents of that late counter-reformation mannerism that found expression in early seventeenth-century Lombard painting. 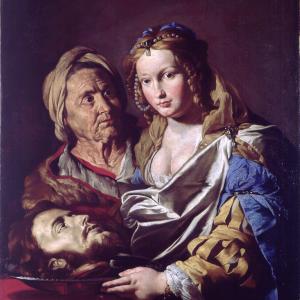 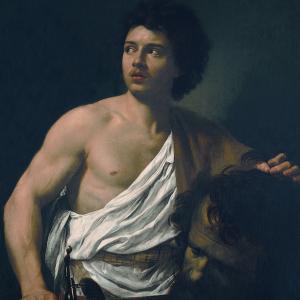 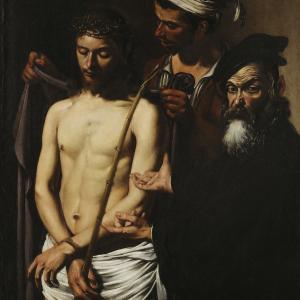