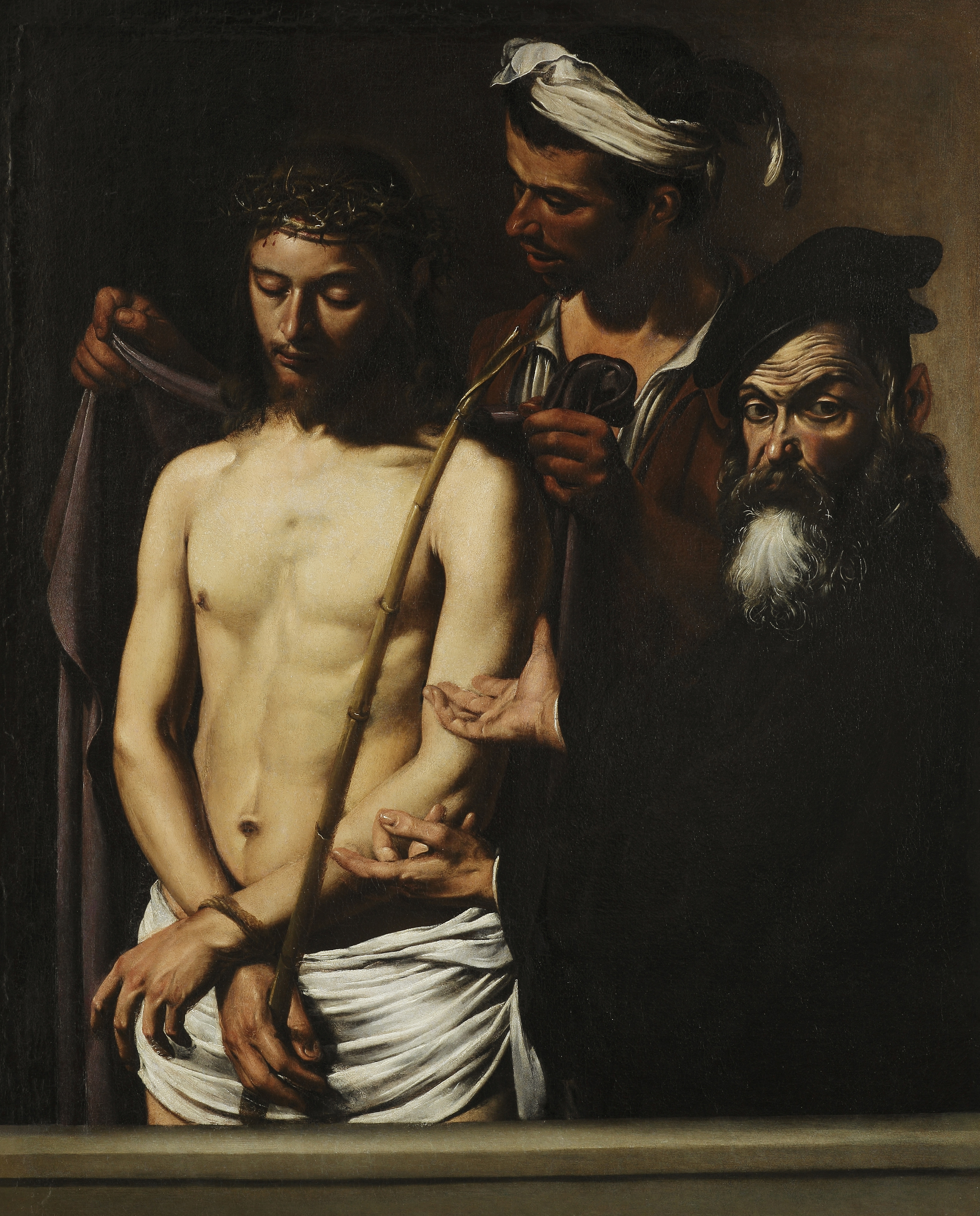 Back to Focus:
The "Caravaggesques"
Author/ School/ Dating:

Registered in the inventory of Palazzo Bianco in 1921

The canvas, the origin of which is still unclear, was recorded in the inventory of Palazzo Bianco in 1921 as being a copy by Lionello Spada of a work by Caravaggio. It was identified by Caterina Marcenaro only in 1953 and, the following year, this was confirmed by Roberto Longhi as being the original work of the Lombard master from which derivative copies were drawn, especially those from the Sicilian area.
Various hypotheses have been proposed regarding the client and original provenance of this work, but there are certain known facts that allow us to reconstruct the sequence of events upto its "discovery" in the Genoese collection.
The hypothesis which connects the Ecce Homo of Palazzo Bianco to a work that Caravaggio himself, in a letter dated June 1605, promised to the Roman nobleman Massimo Massimi, a prominent figure in counter-reformation Rome, was subsequently rejected by critics; other studies have proposed to identify this canvas with that previously in the Genoese collection of Pietro Gentile; or with that meticulously described in the inventory of the Neapolitan collection of the Spaniard Juan de Lezcano (in 1631); or again with that mentioned in the will of the Genoese Lanfranco Massa, drawn up in Naples in 1630. Starting from the first decade of the seventeenth century Lanfranco Massa had put together a collection of paintings, following the example of Marcantonio Doria for whom he was agent and procurator in Naples: it is therefore also possible that an Ecce Homo by Caravaggio was in the Doria collection, while in the Massa collection it was a copy or a derivation of it.
On the other hand, the hypothesis that the work can be attributed to the Sicilian period of Merisi and that it is therefore datable to 1609 (rather than around 1605 as supposed in the past) has recently been put forward; this theory would indicate the arrival of the canvas in Genoa through another Doria, Giannettino, son of the Prince of Melfi, bishop at that time  of the city of Palermo.
As regards its more recent history, which is also uncertain, a document has recently been uncovered which records a proposal  from 1908 for the Municipality of Genoa to purchase a painting of the same subject by Lionello Spada then in the collection of Giovanni Cabella in Genova. Although the subsequent entry of the work into the civic collections is not recorded, the document is certainly worth note.
Beyond the various hypotheses, in any case, the only incontrovertible fact is found in the numerous "repentances" of the work, visible in the hands of Pilate, in the shoulders, in the hands and in the loincloth of Christ, which demonstrate the rapidity of execution and innovation. However, it is clear that the painting arrived in Genoa at an early date. Supporting this, are the specific formal references to the Caravaggesque composition that can be found in works by artists active in Genoa in the early decades of the seventeenth century, such as Strozzi, Borzone, Orazio De Ferrari and Van Dyck, who immediately grasped its innovative use of light. In Caravaggio, also in this painting - in which signs of the Lombard training of the painter are manifest - light and shadow are loaded with symbolic meanings such as in the luminous glow of the body of Christ, depicted in the resigned attitude of the Agnus Dei, which contrasts with the darkness of Pilate's attire which visually reinforces, the negative role of judge of the Roman procurator.
The eloquent gesture of the latter's hands, then, inviting viewers to enter the scene depicted beyond the parapet, gives the episode the characteristics of a figurative "sacred drama".

Budapest, Museum of Fine Art in Budapest
from 25/10/2013 to 16/02/2014
for the exhibition "Two Centuries of Italian Masterpieces. Caravaggio to Canaletto"