The painters active in Venice in the 16th century were undoubtedly among the most admired of the time, influencing - through their attention to colour, saturated and bright in greens, reds and blues, their study of light and the frequent setting of their subjects within vast and open landscapes - the subsequent evolution of painting in northern Italy, and beyond.

The collecting taste of the Italian aristocracy, also in Genoa, and of the ruling families in Europe, were soon directed towards the works of the Venetian masters of the 16th century - among others, Palma il Giovane, Paris Bordon, Veronese - as well as those of Lombard artists, such as Moretto, who had become familiar with lagoon painting and combined it with the typical naturalism of the Brescia-Bergamo tradition.

A journey through Venetian art at the Strada Nuova Museums begins in Palazzo Rosso with a masterpiece by Jacopo Negretti known as Palma il Vecchio (1480? -1528): the Madonna and Child between Saints John the Baptist and Mary Magdalene, painted between 1520 and 1522. In this work the artist, trained at the school of Giovanni Bellini the elder, approaches the new 'tonal painting' of Giorgione and Tiziano, showing greater attention to the effects of light on the colour rendering of the figures and landscape: use of colours superimposed on glazes, with coloured shadows and shades, perfectly translates the sense of light which, clear and limpid, passes falls on the figures and on the landscape, obtaining a soft plastic effect and blending the subjects with the surrounding environment.

By Paolo Caliari known as Veronese (1528-1588), the canvas of the biblical subject of Giuditta and Holofernes, dates from around 1580, purchased in 1670 by Giuseppe Maria Durazzo, father-in-law of Gio.Francesco I Brignole-Sale (it is worth mentioning that this was through the Flemish painter and art dealer Nicolas Régnier). The work is a wonderful example of the artist's ability to represent a scene of great dramatic intensity through strong dynamic tension and magnificent colour contrasts: in particular, observe the carmine red of the blood that flows from the beheaded neck onto the white sheets, and Judith's ivory complexion in comparison to the dark one of the servant. In Palazzo Bianco, also by Veronese, the large signed canvas, of the Crucifixion, from the Genoese church (now destroyed) of Saints Giacomo and Filippo, and the splendid Susanna and the elders, already part of the collections of one of Spain’s the greatest 17th century collectors, the Marquis del Carpio, ambassador to Rome and Viceroy of Naples. Documented in Genoa as early as the 18th century, the canvas well represents the quality of the works that were to be found in the local collections of the past .

Among the various paintings by Paris Bordon (1500-1571), a painter from Treviso who was a pupil of Titian, the Portrait of a man is mentioned in the route of the Museums of Strada Nuova, which for centuries in the documents is identified only as a 'gentleman with red sleeves' , and which today seems recognizable as that of Carlo da Rhò, the well-known Milanese client and collector of the painter; the great Holy conversation depicting the Holy Family, in a pause from their flight to Egypt, and the saints Jerome and Catherine of Alexandria; and the mystical marriage of Saint Catherine of Alexandria, identifiable as the painting that belonged to Cardinal Leopoldo de 'Medici, the greatest collector of the Grand Ducal family.

Conceived as room paintings, from noble Genoese collections, the two paintings Madonna and Child and Portrait of Pietro Andrea Mattioli by Alessandro Bonvicino known as Moretto (1498-1554) and the two twinned paintings by Palma the Younger (Jacopo Negretti, 1544-1628), Christ and the Samaritan woman and Christ and the adulteress are both signed and dated 1599. 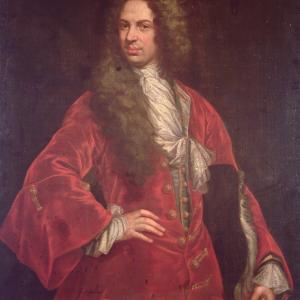 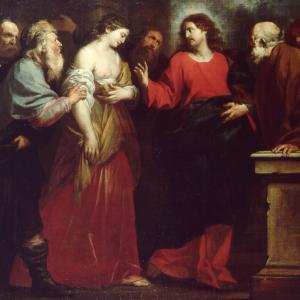 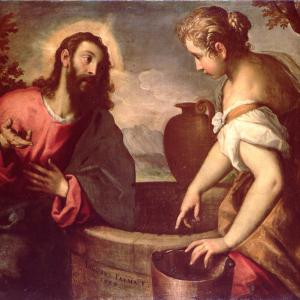 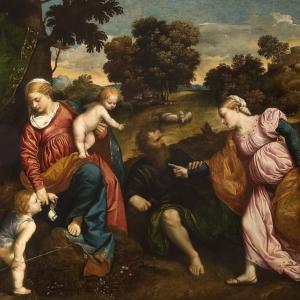 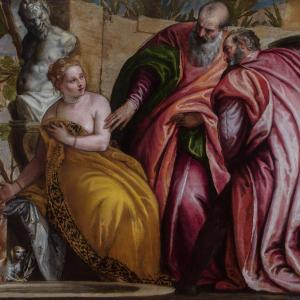 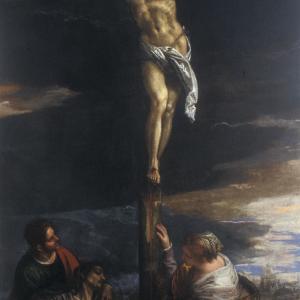 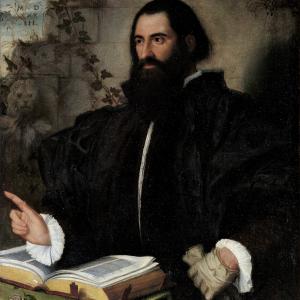 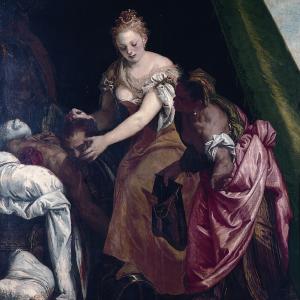 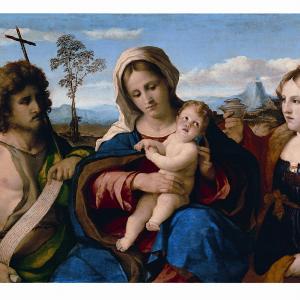 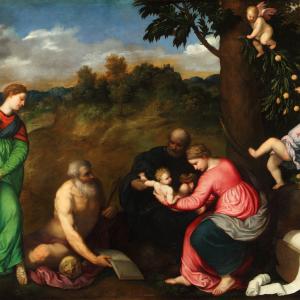