The Frescoes of Palazzo Rosso

The series of wall decorations in the Palazzo Rosso begins in the big hall on the second main floor, strongly desired and conceived by its very first owner: Gio. Francesco Brignole-Sale. It is one of the most beautiful and significant series of frescoes of 17th-century Genoese art.
To execute them, the best and most renowned fresco painters in the city were commissioned to majestically decorate the reception rooms. Upon specific request, these artists gave life to a very complex iconographic programme, aimed to systematically enhance and give prestige to the aristocratic residence and, as a result, the Brignole - Sale family.
In a relatively short span of time, the Palazzo Rosso became a proper construction site animated by numerous artists: Gregorio De Ferrari, Domenico Piola and his son Paolo Gerolamo (1687/1689), first, and Giovanni Andrea Carlone, Carlo Antonio Tavella, Bartolomeo Guidobono, later (1691/1692), not to mention the perspective quadratura painters Enrico and Antonio Haffner, Sebastiano Monchi, Nicolò Codazzi, the plasterers and gilders.
The exhibition lets visitors appreciate a homogeneous glimpse at the masterpieces of the Genoese school, in a balance between architectural space, decoration and furnishing that makes the “casa rossa” (literally, red house) unique in the baroque residential landscape in Genoa. In particular, the first bulk of decorations of the Palazzo is closer to the spirit underlying its construction and the function it was intended for.

The fresco in the big hall, executed by Gregorio De Ferrari, depicted the Myth of Phaeton, the son of Apollo and mythical founder of the Ligurian people. While it was destroyed during World War II (the preparatory sketch is still on display), the fresco represented the core of the whole iconographic programme, which was reiterated in the large painting by Domenico Piola, depicting the same scene. At the centre of the composition, Apollo is the god of the sun with the task to guide the star in the sky, marking the passage of time.
Casa Brignole-Sale wants to be the house of the sun, which lights up the life of the family, through the passing of the seasons. Next to the god, as well as on the medallions on the walls decorated with the skilful work of two perspective painters, the Emilian brothers Enrico and Antonio Haffner, is the lion: the heraldic symbol of the family. It is also the astrological sign of summer when the sun shines the most. The equation Apollo - Sun - Lion thus becomes the main key to interpret the iconological message of the cycle.

The allegories of the seasons are the main theme of the next rooms. Spring, with the myth of Mars and Venus, is the season of love. In this room, and even more in the subsequent room of Summer, Gregorio De Ferrari, who had already learnt Corregio’s lesson in the Dome of Parma, implements his figurative programme in such a way that certain frescoes overcome their two-dimensional nature, by adding the third dimension of depth with protruding stuccoes, thus engaging the viewer in a game of fiction and reality in typical baroque style. Next up are the rooms dedicated to the allegories of Autumn and Winter, frescoed by Domenico Piola.

This first, happier cycle of decorations ends with the so-called Loggia of the ruins or of Diana, the “fun work” by Paolo Gerolamo Piola, who sets the myth of Diana/Selene (the Moon) and Endymion in the ruins of a classical mansion. After a setback in 1691, the works are resumed, though with different artists: Giovanni Andrea Carlone, Bartolomeo Guidobono and Carlo Antonio Tavella complete the frescoes in the western wing in 1692. The iconographic programme followed by Piola and De Ferrari suffers a decisive break, also from the stylistic point of view, as these new artists – unlike their predecessors – fail to achieve the expansion of space that had been the great innovation introduced in the previous rooms. 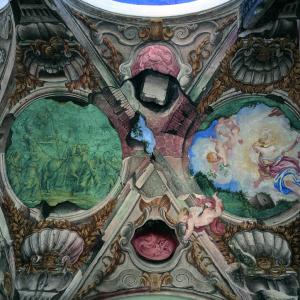 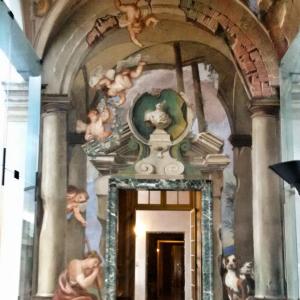 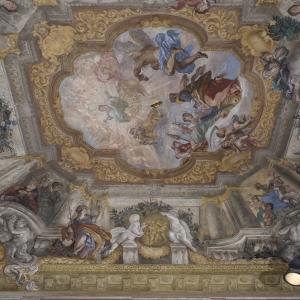 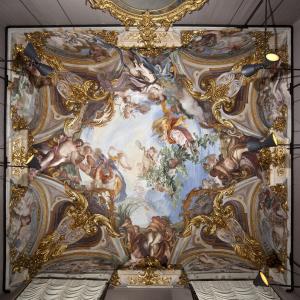 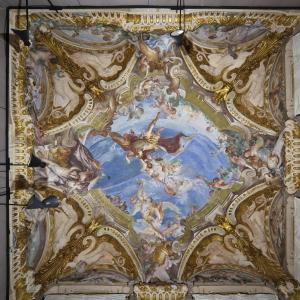 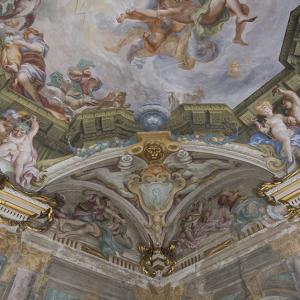 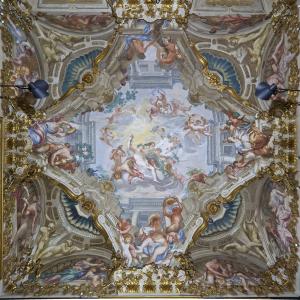 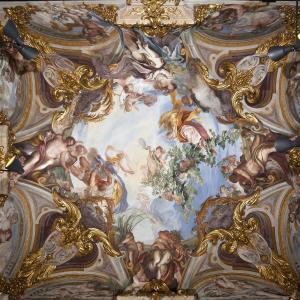