The coin seems to have been an invention of the Lydians, people of present-day Turkey, around 600 BC, but spread thanks to the Greeks for whom it symbolized the political autonomy of the city that coined it (see the golden darico in display case A).

In Rome, after the heavy copper coins (aes grave), the silver denarius was introduced (see display case A) which remains at the base of the monetary system for over 4 centuries.

With the empire, the reference coins became the gold “aurei” and the “solidi” minted by various emperors (see the “aureo”  of  Julius Caesar and the “Aulus Irzio” in display case A) repeatedly reformed in weight and value. Through the early Middle Ages, it was the Byzantine currency that kept Rome's legacy alive until the mid-fifteenth century (see display case A and table display: Byzantine coinage).

In Western Europe, it was Charlemagne who reformed the coinage based on silver in the form of the denarius in contrast to the Arab and Byzantine gold coins.

This brings us closer to the years (from the 10th century) when the growth of Genoa's maritime and commercial power began. When, at the end of the eleventh century, Genoa participated in the First Crusade and laid the foundations of its colonial rule in the East, it did not yet have its own currency and used a "foreign" one such as the Byzantine aurei, the Arabic tarari or silver denarii from other cities such as Pavia (see table display case: Genoa: the coins circulating before the opening of the city mint). 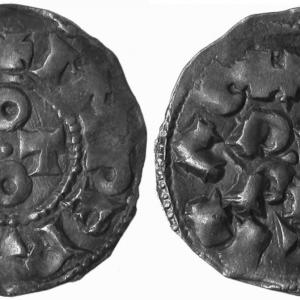