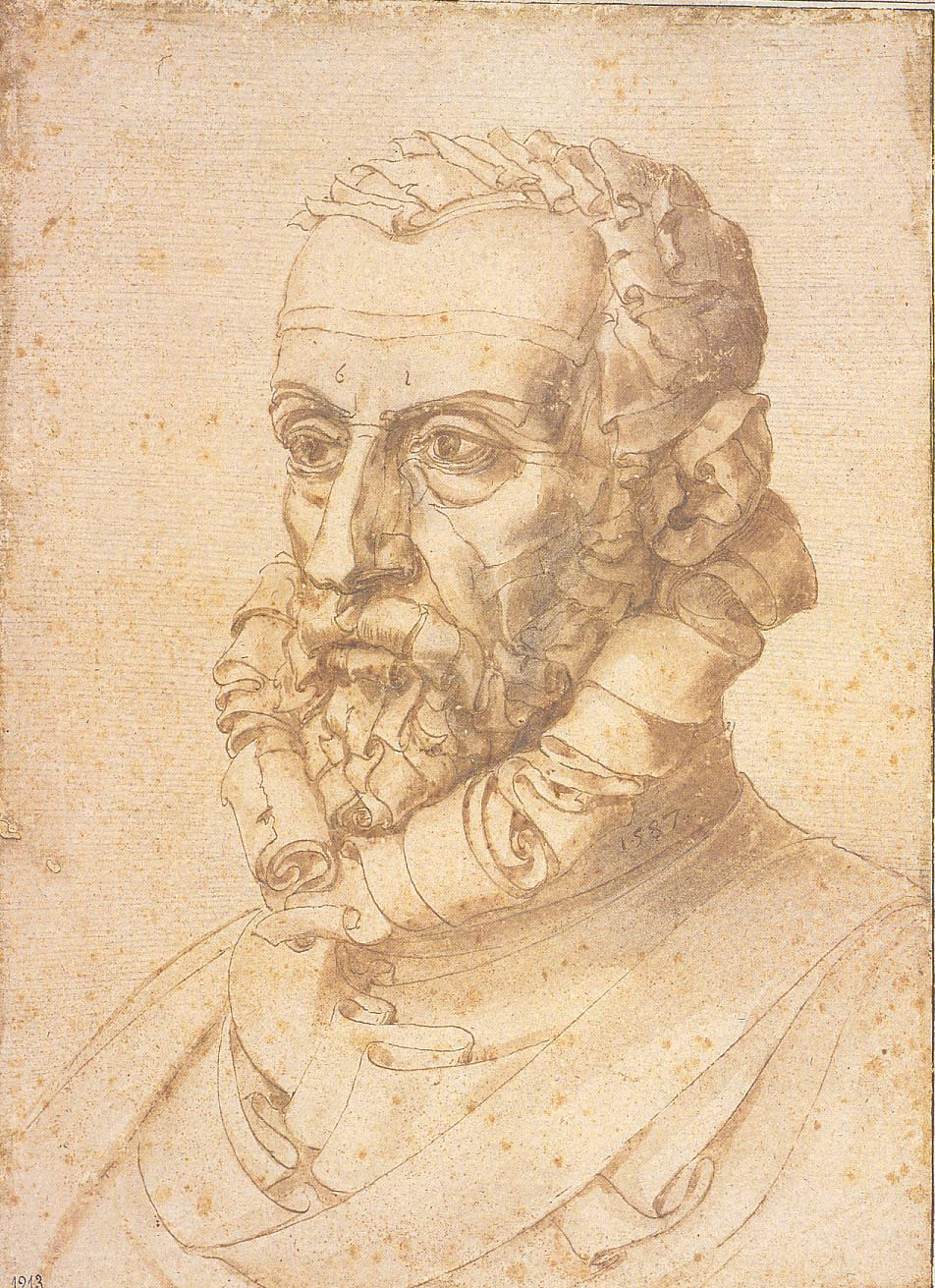 Back to Focus:
Prints and drawings cabinet
Author/ School/ Dating:

Surprising self-portrait of the most eccentric Italian master of the sixteenth century, this pen and ink drawing, expertly watercoloured, reproduces Giuseppe Arcimboldi's features through the artifice of rolled scrolls and sheets cleverly arranged to imitate his physiognomy. Part of the well-known typology of the 'compound heads' that have made the artist famous – in particular those made by combining elements of the plant and animal world - this image is unique in the panorama of Arcimboldo's work: it is in fact the only 'compound head' drawn on paper, as well as being one of the only two known portraits of the master (the other, more traditional, is in the Národní Galerie in Prague), this image is undoubtedly his most important drawing.

The skilful realization of the drawing means that the somewhat bizarre nature of the portrait is only fully revealed at close range, the compositional artifice becoming clear only by taking ones gaze from the particular to the general and vice versa, mixing play, amazement and disorientation, typical of Mannerism. It is one of the most refined works of the artist because his taste for wonder is combined with a fine attention to the natural world typical of the Lombard training of the master, certainly derived in part from the study of Leonardo's graphic works and in particular of his realistic ones ‘grotesque heads'.

The drawing is dated '1587' (visible at the base of the ruff), when Arcimboldo was at the height of his career and “61”, as indicated on the front of the portrait - he had just concluded his more than twenty-year stay at the refined court of Rudolf II of Habsburg in Prague. It is therefore almost a figurative declaration, through which the artist presents himself as a cultured intellectual and a 'man of letters', and chooses to legitimize a 'lofty', allegorical-symbolic interpretation through his own bizarre inventions. On the other hand, in the service of the emperor, between esotericisms and extravagant wunderkammer collections, Arcimboldo had been able to best interpret his multifaceted role as 'court painter' by creating, in addition to ephemera scenes for parties, theatrical costumes, precious objects, even 'composed' allegorical portraits - between naturalism and surrealism - in which he reinforced the symbolic and encomiastic aspect through ad hoc poetic texts written either by himself or entrusted to writers close to him.

The work entered the civic collection through a legacy from Marcello Durazzo (1848) which was recorded as being by an unknown Genoese artist, subsequently it was attributed to the Lombard master Piero Boccardo (in Masters of drawing in the Genoese civic collections, exhibition catalog, Genoa 1990, cat. 28).