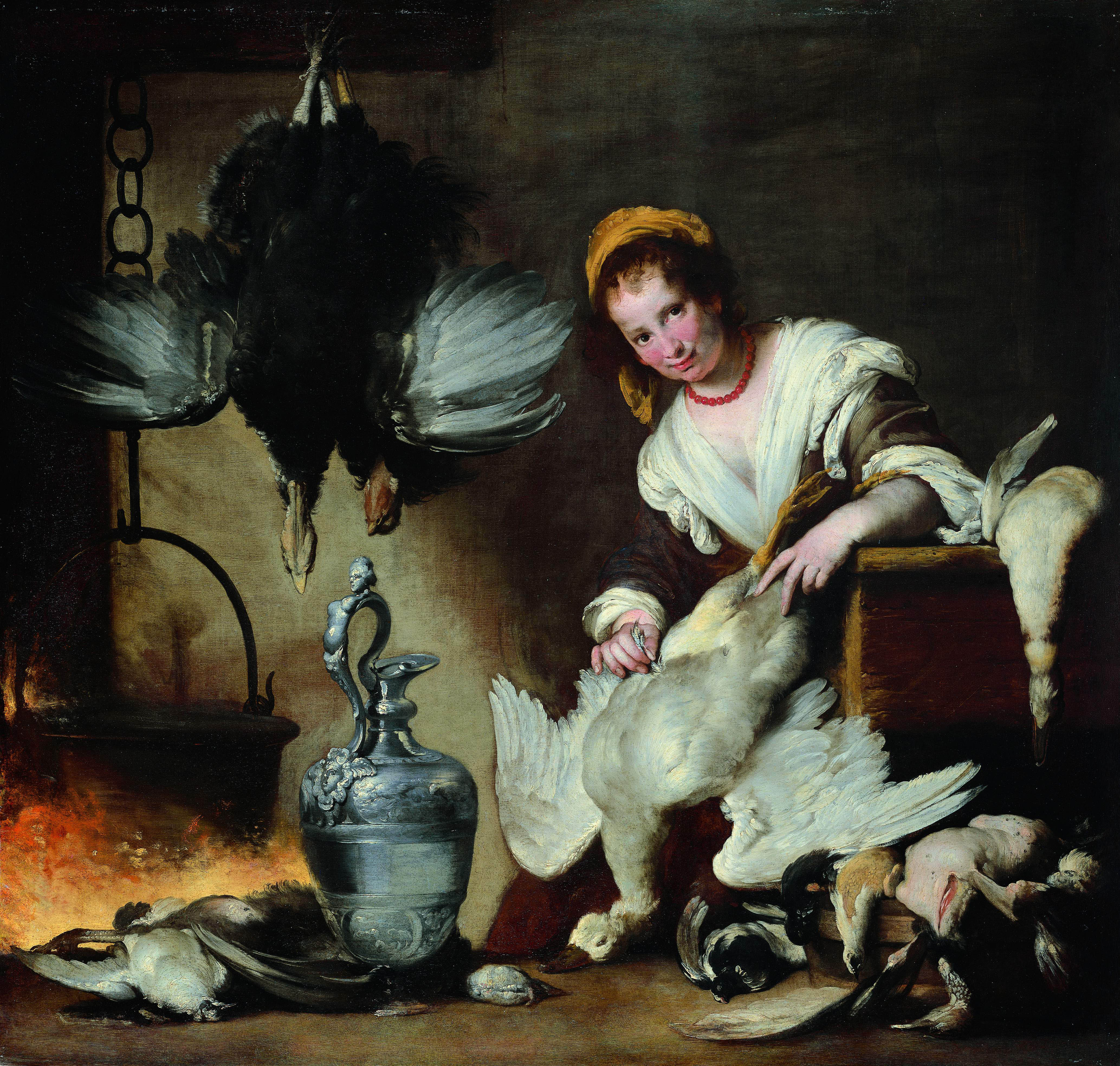 Certainly Strozzi's best-known painting, this canvas, known as La cuoca, portrays rather a lowly kitchen maid intent on plucking a goose between chickens and pigeons, with a turkey hanging behind her, the scene is of the kitchen of a seventeenth-century Genoese aristocratic residence. At the time, in the families of the local nobility the profession of cook was reserved exclusively for men, while women were reduced to more humble tasks, such as plucking poultry; it is clear that the setting is of a great house from the presence in the foreground of a richly embossed silver dish, with an elaborate handle depicting a female figure.
The painting - which critics today believe belonged originally to the collection of Gio. Carlo Doria a cultured collector of what was then “contemporary” art – the work is mentioned for the first time in the inventory of Palazzo Rosso of 1683 - 1684 as property of Gio. Francesco I Brignole-Sale, who had commissioned the building; however, from the second decade of the eighteenth century until at least 1774, it is recorded as being displayed in the family villa in Albaro: it seems likely that this less prestigious location was motivated by the “everyday” subject of the painting, which was probably judged unsuitable for the decoration of the prestigious city palace, the picture gallery of which had been enriched, between the late seventeenth and early eighteenth centuries, with paintings of historical subjects or sacred iconography.
Strozzi's work is an admirable synthesis of the various influences that, in the early decades of the seventeenth century, represented the essence of the local school painting: on the one hand, the Flemish taste for "kitchens", "markets", "pantries" as settings, of which he had found examples, already in the mid-16th century, in works by painters such as Aertsen and Beuckelaer which were present in Genoese collections; and, on the other, the new attention to the "still life" genre, thanks to the presence in the city of painters, still from Flanders, such as Jan Roos or Giacomo Liegi; lastly, the first signs of the naturalism of the Caravaggesque that constituted the other modernizing influence found in the local school, here joined by the typical brush stroke of the artist.
From an iconographic point of view, the will to measure oneself with the dipiction of everyday subjects is clear, illustrating an adherence to reality which was still unknown to Genoese painters, and singular if we consider this choice by a member of a religious order; however, the theory that beyond this immediate meaning other symbolic content may lie hidden in the painting seems convincing, probably an allegory of the Four Elements, to which the birds (representing air) would allude, the elaborate dish, for water, the "cook", for the earth, and the last element being the actual depiction of fire, which the painter paints with great skill in the flames under the cauldron.