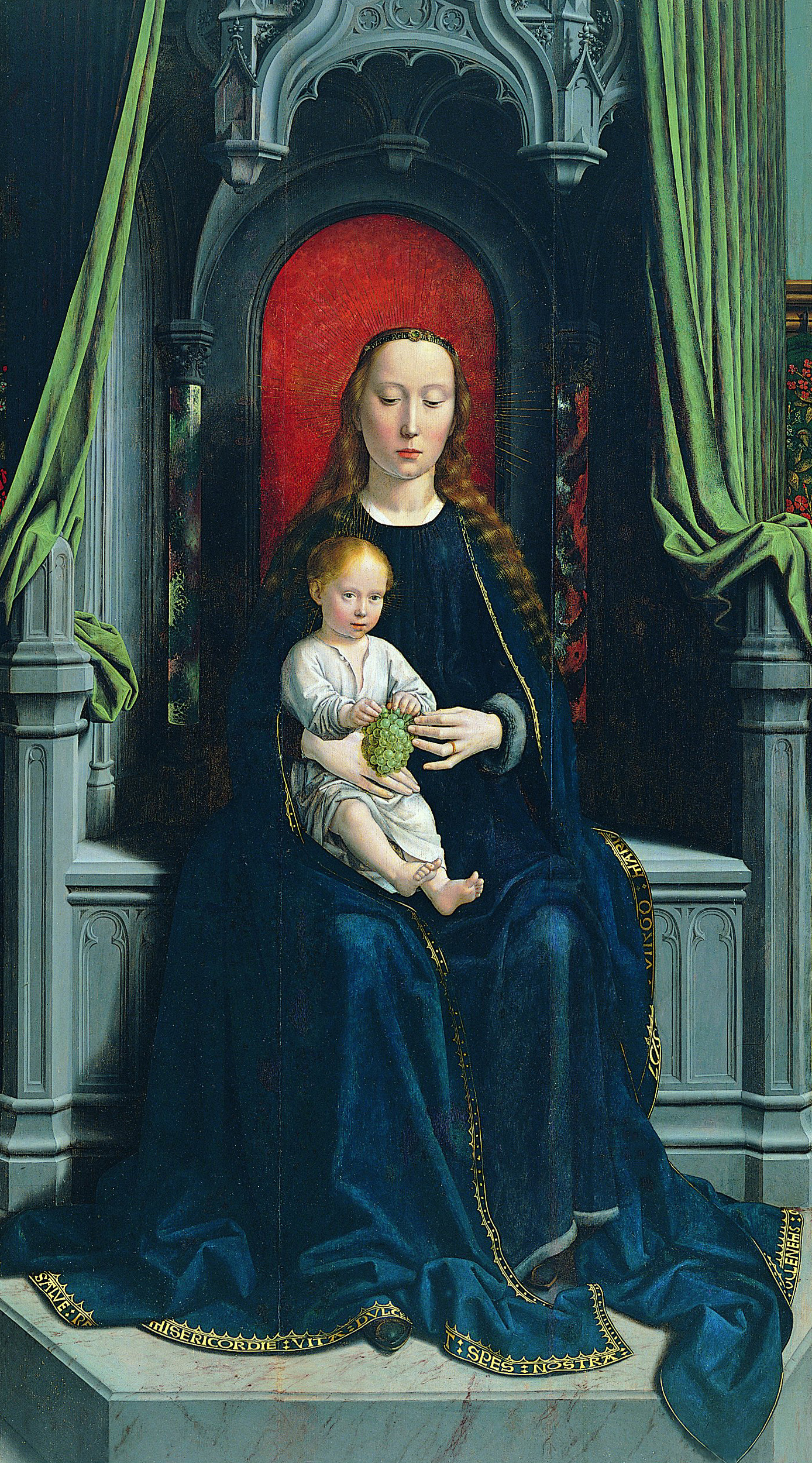 Benedictine Abbey of San Gerolamo della Cervara; in the collections from 1982

The polyptych comes from the Benedictine abbey of San Gerolamo della Cervara, located on the east coast of Genoa, between Santa Margherita Ligure and Portofino, and was commissioned from Gerard David, a well-known Flemish painter, in 1506 by Vincenzo Sauli to be was placed at the entrance of the choir of the monastic church. The author's name, the size, the exceptional artistic quality, together with the impalpable charm of the psychological atmosphere, make the work a prominent element in the context of “Flemish” art in Liguria.
Of the seven panels that made up the polyptych, Palazzo Bianco exhibits the three main sections representing the Madonna and Child, called Madonna dell'Uva, San Gerolamo and San Benedetto, as well as the upper crown of the central table, depicting the Crucifixion.
The missing parts can be found today in the Metropolitan Museum (the Annunciation with Angel and Madonna) and in the Louvre (lunette with God - the Father - giving his Blessing).
The three sections make up asingle space, made continuous by the glimpse of the floor, by the architectural structure of the throne and by the "millefiori" tapestry that is the background for the Virgin and the figures of the two saints. This type of tapestry was considered a metaphor for Paradise, populated by the various categories of the elect - the martyrs are referred to by roses, the confessors by violets, while the lilies represent sacred virgins - and helps to indicate the space that welcomes the sacred figures as paradise.
In the centre, seated on a throne, Mary holds Jesus in her arms and helps him detach a single grape from a bunch, which alludes to the sacrifice of the cross and the Eucharistic wine of salvation. The gem that shines in front of the Virgin, applied to a strip of precious fabric on which Ave Maria is embroidered, alludes to the words of the Psalmist: “Royal Virgin, adorned with gems of many virtues, luminous for the splendour of the spirit and body ", while the royalty of Mary, which derives from belonging to the lineage of David and being the mother and bride of the King of Heaven, is confirmed by the verses of the Salve Regina, embroidered in gold characters along the hem of her mantle.
The gesture of the Mother and her apparent detachment are a sign of the painful acceptance of the destiny that awaits the Child as well as the gaze of Christ, unique among all the actors of this silent and solemn scene that fixes the eyes of the spectator, reminding us that it was for our salvation that his blood will be shed.