The collection of Emilian drawings which forms part of the Drawings and Prints Cabinet of Palazzo Rosso is one of the most important at an international level and, within the collection, it is the second largest (after those of the Genoese school). It consists of about 300 drawings, the provenance of which is well documented: for the most part they originate from purchases by the noble collector Marcello Durazzo (1790-1848) – who had a refined taste and was expert in graphics - Durazzo stayed in Bologna in 1810, and through the painter Francesco Giusti (1752-1828) he acquired drawings coming from important city collections such as, among others, that of Canon Nicoli, heir to the Bolognese engraver Clemente Maria Nicoli (1753 - after 1811), well-known author of prints from Guercino. For his part, Giusti had acquired a substantial number of drawings from the last descendant of the Gennari family, Carlo (1712-1790), who had inherited them from Benedetto and Cesare Gennari, grandsons and pupils of Guercino, they included works by the master of Cento along with others artists.

It is through such transactions that, among others, the two large nude studies by Guercino in oiled charcoal on gray paper (inv. D 1702-1703) came into the Genoese collection, they were formerly owned by Cesare Gennari, as indeed was the drawing by Amico Aspertini the Doctor’s Tomb (inv. D3681), which we know had belonged to master of Cento and who, according to CC Malvasia (1678, I, p. 144), held him in the highest regard. The bequest of the drawings by Marcello Durazzo to the city library in 1848 - including, in addition to the Emilian sheets, drawings from the Genoese, Lombard, Tuscan, Umbrian, Marches and Roman schools – formed the first nucleus of the civic collection.

Among the most precious Emilian drawings we should mention: the study for an Apostle by Correggio, this work was preparation for one of the figures frescoed by the master on the drum dome of the Cathedral of Parma and comes from the collection of Alessandro Maggiore (1764-1834); a Dragons Head by Bartolomeo Passarotti, a number of whose drawings are in the collection; sheets by Ludovico and Annibale Carracci; by Guido Reni (among them, a sequence of three autographed studies for the Pietà dei Mendicanti in Santa Maria della Pietà, now in the National Art Gallery of Bologna); the head of San Gerolamo by Domenichino for the altarpiece with the Last Communion of the saint, previously in the church of San Gerolamo della Carità in Rome and today in the Vatican Picture Gallery; as well as numerous red pencil drawings by Simone Cantarini, including a study with Jupiter, Neptune and Pluto who pay homage to a coat of arms for an engraving in honour of Cardinal Pier Maria Borghese, which was to bear a eulogy written by the Bolognese philosopher Giovanni Fantuzzi (inv. D1800).

The numerous drawings by Guercino are among the most important in the collection and are of various types, subjects and techniques: in addition to the two nudes study in oiled charcoal mentioned above and the figure of Armato outlined in the same medium, there are many works in red pencil and an equal number in pen and ink with brush watercolors, techniques in which the hand of Guercino is equally recognizable and which the master alternates in the design for a single commission. This is the case, for example, in the preparatory drawings for the Prophets frescoed on the sails of the dome of the cathedral in Piacenza (1626). Among the beautiful drawings by the master from Cento there are subjects of a religious nature as well as genre scenes - such as the Soldiers counting money (inv. D1716) - mythological subjects - such as the Hydra of Lerna (inv. D1722) - and landscapes. 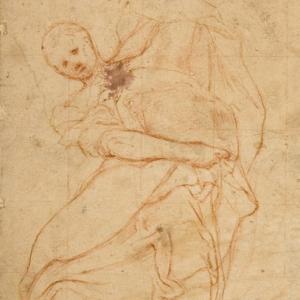 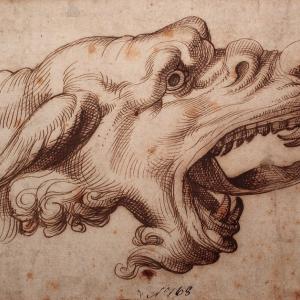 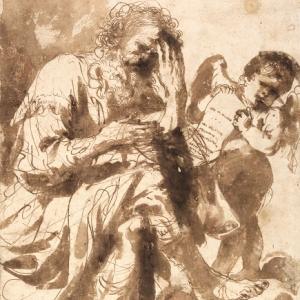 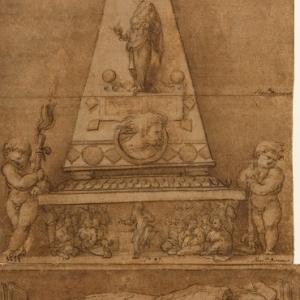